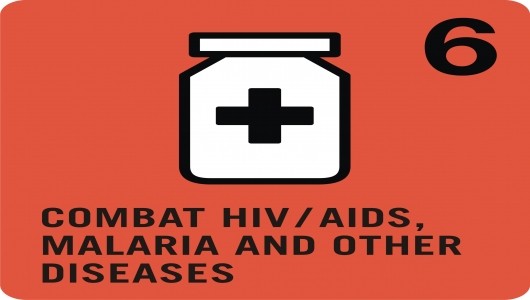 A UN report released on July 14 revealed that the sixth goal of the Millennium Development Goal agenda– to halt and reverse the spread of HIV by 2015– has been met six months ahead of schedule. According to the report, AIDS-related deaths have fallen by 41 percent since the MDGs were implemented in 2000, while new HIV infections have fallen by 35 percent. The report also reveals that the international commitment to the MDGs and to ending the HIV epidemic has averted 7.8 million AIDS-related deaths and 30 million new incidents of HIV prevention.

The MDGs, which were created by the UN in partnership with the largest gathering of world leaders in history 15 years ago, consisted of a list of eight goals that countries committed to reach as part of the UN Millennium Declaration. UN reports released this year, which have analyzed the success of the MDGs, have revealed that many of the goals have been successfully met.

Efforts to achieve MDG Goal 1, to eradicate extreme hunger and poverty, for example, resulted in a decline in the number of people living in extreme poverty by 130 million between 1990 and 2002. Efforts to achieve MDG 4, to reduce child mortality rates, also helped child mortality rates fall from 103 deaths per 1,000 live births a year to 88 within the same time period. The success in achieving MDG 6, however, has been particularly remarkable, especially given that in 2000, AIDS was one of the biggest killers in the world.

The results of the recent report also represents a huge success in the way that UN goals are measured; since it reveals that success in achieving MDG benchmarks can actually be quantified with real, hard data when the international community puts in a concerted effort to record progress in achieving a specific goal. The success of MDG 6 of HIV prevention is also regarded as one of the smartest investments in global health and development to be reached in recent history.

UNAIDS has also stated that the result of efforts to combat HIV and AIDS illustrates a theoretical success, since it reveals a seismic change in the way that the international community regards illnesses that have traditionally been concentrated in poor, non-Western areas such as sub-Saharan Africa.

“Fifteen years ago there was a conspiracy of silence. AIDS was a disease of the “others” and treatment was for the rich and not for the poor,” said Michel Sidibé, Executive Director of UNAIDS. “We proved them wrong, and today we have 15 million people on treatment—15 million success stories.”

As the Millennium Development Goals transition into the Sustainable Development Goals this year, UN officials have argued that more aggressive steps need to be taken to continue the work achieved in slashing the AIDS epidemic and increasing HIV prevention.