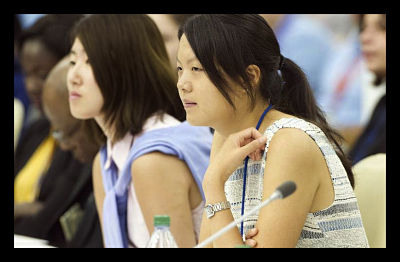 The UN Headquarters welcomed hundreds of young people from all corners of the globe to bring their ideas to the table. The focus of the conference was to figure out ways to achieve the Millennium Development Goals ahead of the 2015 deadline and to continue with poverty reducing measures beyond the expiration date. The conference lasted four days.

The eight Millennium Development Goals were set in 2000, when leaders of the world’s most powerful nations met at a UN summit to discuss the most pressing issues facing humanity. There they agreed on a time-table for achieving their goals and ending global poverty. The goals focused on alleviating poverty and hunger, expanding access to education and health care, and fighting gender inequality, among other things.

Ban Ki-moon, the Secretary-General of the UN, addressed the youth of the world via video. “The clock is ticking on the MDGs and much remains to be done,” he said. He emphasized the importance of young people around the world demanding accountability from their leaders and sharing their ideas. The Secretary-General noted that this generation of young people is the largest the world has ever known and that they are able to utilize technology to communicate like never before. But he also noted that the current generation of youth faces unique challenges like dwindling resources, lack of opportunities, and climate change. “It is important to recognize the importance of harnessing the passion and drive of this generation of young adults to propel us into a future of international peace, development and cooperation,” said the UN High Representative for the Alliance of Civilizations, Nassir Abdulaziz al-Nasser.