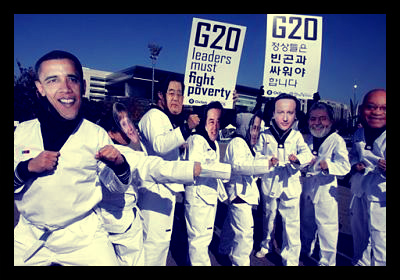 Last February, a group of G20 ministers met in Australia to evaluate and establish global growth goals for the next five years. In this meeting, they reasserted their countries’ commitment to “carefully calibrated and clearly communicated” monetary policy settings. According to a communique published following the meeting, G20 members will not allow for complacency when it comes to fostering growth measures. While specific plans have yet to be developed, the main goal is to raise the global GDP by 2 percentage points in the next five years, which promises to create millions of new jobs.

Supporting these plans, the International Monetary Fund (IMF) issued a report outlining strategies to raise the global GDP by 2.25 percent.

Accordingly, it states that while this established goal is ambitious, it is not unrealistic. However, as recovery from the 2008 recession remains disappointing, the global economy “remains far from achieving strong, sustainable and balanced growth.” Coupled with issues of demand and high levels of debt, one element of weakness remains the volatility of the financial system.

In another report, the IMF has announced that regulators have not done enough to stabilize the global banking system and protect taxpayers from another “too big to fail” situation. Banks and investment firms remain too big and too intertwined, risking another episode similar to the 2008 crisis. The risk of big banking bailouts using taxpayers’ money remains very much alive.

According to the report, regulations implemented by western governments could be “mutually destructive” and undermine their ability to address future bank failures. Moreover, policymakers have failed to make banks stand on their own. Through implicit subsidies and coordinated rescue plans, big financial institutions remain tethered to the government. In fact, accounting for the various subsidies these institutions perceive, brings the total bill close to the 2008-09 government bailouts. While in the U.S. these implicit subsidies have been limited to 70 billion a year, in the Eurozone they reach 590 billion.

The IMF acknowledges that there is substantial progress towards making the global banking system more secure, especially by forcing them to hold more capital. However, to prevent another crash, this should be coordinated along more structural reforms across countries. If not, the IMF predicts that another financial crisis could cost the Eurozone another 300 billion in bailout and the rest of the world much more in a weakening economy.

In a world where state economies are highly interconnected and interdependent, this translates in funds being diverted away from foreign assistance. While governments have to be ready to spend billions of dollars to remedy a failure in the financial system, foreign aid funding is in constant danger of being reduced. Indeed, the U.S. foreign aid budget has been reduced by almost 20 percent in the last 15 years.

To put things in perspective, between 2008 and 2009, bailouts of various banks and investment firms reached a total of 204 billion dollars, out of which only 90 billion has been repaid. This is equivalent to the annual budget of the Gates Foundation, USAID, UNICEF, PEPFAR, UNDP, World Food Program, UNCHR and the Millennium Challenge Corporation all together.

G20 member countries remain committed to creating a climate of economic stability. In preparation for the Brisbane summit next November, they aim to specifically map out reforms in response to the 2008 global financial crisis. This would entail more resilient financial institutions, ending “too big to fail,” and making the world of derivatives safer.