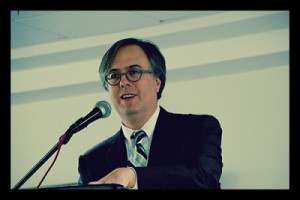 The world has come a long way in terms of reducing global poverty and diseases like HIV/AIDS and malaria, however, we may see these positive trends start to reverse if funding is lost. Gerson is concerned that all of the progress towards reaching the Millennium Development Goals by 2030 could be compromised with cut funding. With the upcoming budget cuts, Gerson reminds us that not all cuts have the same impact. He explained, “Cuts that are evenly applied aren’t evenly felt. There’s a difference between cutting a highway program and cutting a malaria program.” The former Bush administration staffer has been acclaimed for forming the President’s Emergency Plan for AIDS Relief, a program that worked to provide HIV/AIDS treatment to impoverished people.

Given that foreign aid programs account for such a small percentage of the federal budget, Gerson reminds congress that foreign aid is not to blame for the current deficit. He specifically criticized Rand Paul for his outspokenness against aid. The ONE organization praises Gerson for his foreign aid and HIV/AIDS prevention advocacy and hopes that, with his leadership, Washington will continue to support USAID and other foreign assistance programs.