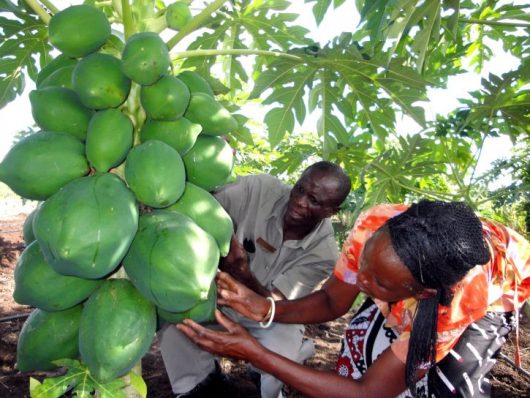 Africa’s total population is expected to double by 2050, reaching 2.5 billion people. However, the continent already struggles to feed its current population today, spending $35 billion yearly on importing food. If food security in Africa continues its exponential reliance on other countries, the continent will need to spend a projected $110 billion by 2025 on food imports.

Africa has tremendous potential to produce its own food rather than relying on imports. The continent holds 65 percent of the world’s arable land, meaning Africa could be feeding over nine billion by 2050 if all of its land resources are utilized.

In sub-Saharan Africa, 26 percent of people over the age of 15—153 million people–suffer from severe food insecurity, which is the highest rate in the world. Lack of nutrition is also a large issue, resulting in growth stunting and low birth weight as well as obesity and ailments such as vitamin A deficiencies and anemia. Malnutrition contributes to nearly half of all deaths in children under five years old.

In order to fight hunger in Africa, the African Orphan Crops Consortium (AOCC) is using a DNA sequencing machine to create a new generation of African super plants. The AOCC hopes to use cross-breeding on 101 of Africa’s traditional plants to create more nutritious, adaptable and fruitful crops. The effort’s goal is to provide food security in Africa as well as reduce stunting and other effects of poor nutrition.

The AOCC collects the genome sequences of important endemic plants. Scientists then re-sequence the plants, resulting in more nutritious, productive and robust varieties. Then, they make the seeds and information available to farmers and the public domain, advocating for their use to improve crop diversity.

The association has partnered with the University of California, Davis in organizing the African Plant Breeding Academy. The academy trains 250 of Africa’s best plant breeders in new and advanced theories and technologies for plant breeding, preparing them to perform their own sustainable research and crossbreeding of African crops. By utilizing its crops and land to their fullest potentials, strengthening food security in Africa will be possible.