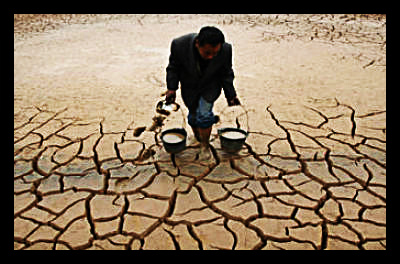 New reports from the National Academy of Sciences suggest climate change could cause severe water shortages across the world. Worst-case scenarios given by one author of the study, Franziska Piontek, say 18 percent of the global population could “experience severe pressure in all four sectors.”

At a time when food and water shortages in the developing world have become a commonality, the projections give insight to a disturbing future for the world. Areas projected to be particularly hard-hit include the Mediterranean region and the southern United States.

Dr. Jacob Shewe of the Potsdam Institute for Climate Impact Research said, “We all depend on water for so many different purposes, and water scarcity… really impairs many things that people do and that people live on.”

While the debate about climate change continues, extreme weather patterns have not waited for the debate.

Events like Typhoon Haiyan have left parts of the developing world devastated, and recent droughts have afflicted the Amazon and North America. While debate has stalled on the best way to combat climate change, and whether it even exists, the scientists that do believe in climate change feel that the problem is only getting worse from here.

The area of the Amazon affected by this most recent drought is twice the size of California, and could portend to other extensive droughts brought on by climate change. Scientists from the NASA Jet Propulsion Lab have found a precipitous decline in rainfall since about 2005, with smaller declines observed from as far back as 1970.

Not only does freshwater scarcity affect the quality of life of citizens in developing areas, but also their culture as well. It looks that a number of plant and animal species could be endangered by the lack of fresh water.

Subsequently, the people relying on these species could be forced to different industries that they may not have the infrastructure to get involved in.

Most scientists that believe in human-caused climate change attribute it to the greenhouse gas emissions given off by the developed countries.