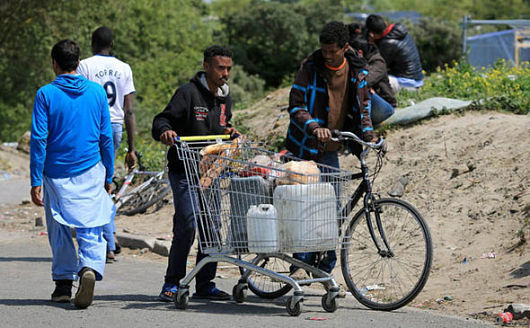 The French government has pledged to provide €500,000 ($567,000) to a migrant town near Calais. The make-shift town has been a source of controversy for France and a point of criticism from the United Nations due to poor sanitation standards and treatment of migrants.

This camp, dubbed “New Jungle” by locals, is home to an estimated 4,000 migrant workers who left their home countries to find work and refugee status in Great Britain. When high security prevented them from crossing the English Chanel the migrants were left stranded in France, in a political limbo.

The majority of the migrants are sans papiers (without papers) and have a difficult time finding work or government aid without legal documentation. When opportunities in France dwindle, the migrants (including women and children) are left without a place to go except for the camps.

Last year, the government of France shut down another nearby migrant town nicknamed the “Jungle”. The area had had humanitarian groups concerned for several years.

Since the area was not a legal town, it did not have any government protection nor requirements to meet health standards. Makeshift tents surrounded the area, and the undocumented migrants living there had little to no access to water, electricity or food resources.

The destruction of the camp only resulted in the creation of another migrant camp north of Calais, the current “New Jungle”. Like its predecessor, New Jungle has been condemned by the United Nations.

New Jungle residents are often surrounded by garbage and there is no running water. Although there are surrounding towns, several of the migrant workers fear leaving due to worries about racial discrimination and hate crimes.

As a result, sanitation standards are very low and the migrant workers have very little opportunities to buy food or seek medical attention.

The current aid will lessen some of the migrant workers’ woes. The French government will begin working on plans to provide running water, electricity and better access to medical care for the migrants.

Part of the money will also go into creating sturdier homes in the New Jungle and another 10,500 lodgings throughout France. These lodgings will be available to men, women and children who currently reside in France as migrants.

While the European Union believes it is a step in the right direction, the French government worries for how long this can last. France has experienced large amounts of migrants entering the country for the past 15 years. However, current crises in the Middle East and Africa have caused more people to enter France in the past six months.

Brigitte Lips, a Calais resident, states, “The ones who make it here have already escaped death several times. They’ve crossed war-torn Sudan, then the Libyan desert, and then packed into rickety boats to cross the Mediterranean Sea.”

As long as war and poverty continue to grow in regions such as Afghanistan, Eritrea, Sudan and Syria the amount of refugees and migrants entering France will continue to increase.