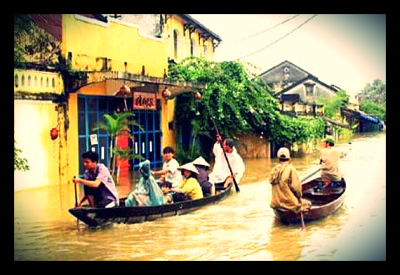 A torrential season in Vietnam spelled disastrous for its citizens with flooded regions, killing many.

Vietnam is familiar with floods upon floods each year. The mid-November storm, named Podul, was the fifteenth storm to hit the country and resulted in 34 deaths, majorly caused by drownings. Evacuations in the south central coast of Vietnam number in the ten thousands as heavy rains raised water levels to .67 meters.

The numbers worsen as over 80,000 were left without homes and displaced in the ensuing floods.

Podul was a subsequent storm following Typhoon Haiyan, which ravaged the Philippines. The latter storm weakened as it passed through Vietnam but nevertheless took 14 lives. The recurrence of storms and floods often devastates the central region of Vietnam the most. The central region contains highlands that produce coffee, one of Vietnam’s primary exports.

Vietnam produces 17 percent of the coffee in the world and plays a large part in its economy. Over 60 percent of Vietnam’s population lived in poverty, but through the years, Vietnam’s transformation into the second largest coffee producer in the world has reduced to leaving 10 percent of its people in poverty.

Companies such as Nestle own processing plants located in Vietnam. Unfortunately, drying coffee beans for eventual export is hindered by the massive amounts of rain and resulting floods.

Flood regulation is a little better in Vietnam’s capital, Ho Chi Minh City (HCMC,) as urban planners ensure the infrastructure can support the city during times of flooding, especially since HCMC is situated one meter above sea level. Outside the capital, however, the less urban regions remain vulnerable to floods.

Even if the dangers of stormy weather and rising water do not endanger the Vietnamese citizens, diseases from the water such as dysentery can prove fatal.

The Wall Street Journal reports that over 220 lives have been lost due to floods and storms since the beginning of 2013.

It is with hope that the advent of the New Year will not prove to be similar.