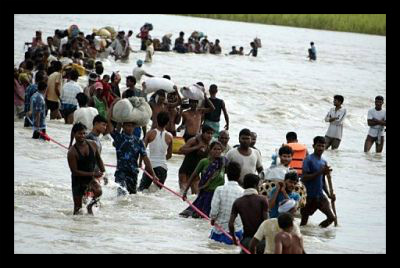 On August 2, a landslide and flooding in Nepal killed approximately 156 people. It completely covered a main highway leading to China with 20 feet of debris, blocked a major river and damaged hydro power stations, causing a 10 percent power loss across the nation. The Nepal Red Cross Society said that this recent two kilometer-long landslide was the worst in the nation’s history.

As a result, experts are encouraging the Nepalese government to map out hazard areas and include natural disaster planning in its economic and development plans for the country. Experts also agree that an early warning system could have avoided the large death toll.

Almost 80 percent of Nepal’s residents live in rural areas and 25 percent of the total population lives on less than $1.25 a day. About 3.5 million people are food insecure, according to the United Nations Food and Agriculture Organization. As a result, the impoverished in Nepal are among the most severely affected by natural disasters because their resources are so greatly limited.

The United Nations Development Programme explains “the poorest of the poor, who largely rely on agriculture, typically live on steep slopes under the constant shadow of landslides, or in low-lying flood-prone areas…have virtually no resources with which to bounce back after a weather-related calamity.”

Typically, communities that live in poverty also live in high-risk areas and, because of poverty, cannot afford to move to a safer location before or after a disaster.

Despite over 3.6 million people being affected by flooding, the New York Times writes, “Villagers continue to return to their ancestral homes where they at least have access to fertile land and water, which enables them to make…a living.”

Yadav Prasad Koirala of the Department of Natural Disaster Management stated, regarding the August 2 landslide, “We have names of 159 people who are believed to be missing and buried, but there could be even more people.” Furthermore, lack of official records may mean the death toll is even higher.

A local resident of Mankha who was injured during the landslide expressed fear that the people in his village were all killed. “There are nearly 100 people in the 60 houses in my village and 20 more people in the neighboring village who were buried by the landslide. All of them are likely dead.”

The ministry of home affairs reports 300 deaths and 3 million dollars of damages per year because of landslides and floods. Although landslides are common in Nepal, with 14 major events since 1967, the recent landslide was unique because it was the first to occur in an area with major infrastructure.

It is hard to imagine the struggle an average American has to go through to recover from a natural disaster, but in a country with a much higher poverty rate and lower standards of living, it is even more difficult.

The concept of risk vulnerability is well established in social sciences, and it has been recognized by several academics that the poor are endangered more by natural disaster than wealthier people. The poor people of Nepal are certainly among the most vulnerable in the world to these natural disasters.