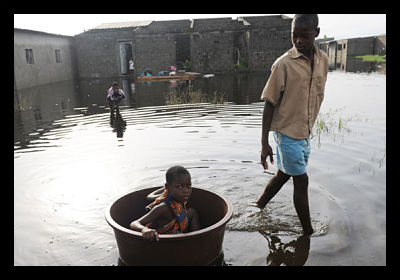 The Ivory Coast has recently been pummeled by dense downpours as a result of the annual rainy season that sweeps across the entirety of the region. The rain has caused massive flooding in the Ivory Coast, washing away houses and triggering landslides in many places around the country. In early June, 23 people were killed by a particularly bad landslide in Abidjan, the largest city in the country. Hundreds more have been stranded in their homes since the floods started.

The rainy season is nothing new on the continent of Africa, yet every time it arrives tragic events like these continue to happen. According to the U.N. Office for the Coordination of Humanitarian Affairs (OCHA), 2 deaths were recorded due to flooding in 2013, and between 2009 and 2011 at least 49 were killed. This year it has been projected that up to 80,000 residents in Abidjan could be affected by flooding.

Slums in Abidjan and surrounding areas have been hit particularly hard. Thanks to prior political crises, slums in the city of Abidjan have been constantly expanding and spreading without any sort of oversight. As a result, makeshift living arrangements have been hit especially hard whenever floods or heavy rain occur in the region.

The Ivorian government has been trying to rectify this problem by relocating people out of the slums into safer areas. So far, government officials have offered $2,000 USD to each of the 23 families that lost someone during the most recent landslide, provided they agree to move out of their current home into a safer area. They have also tried to locate 850 hectares of land which would be used to relocate those who currently live in danger of flooding. The military has also been involved, mostly through clean-up efforts but also in a variety of rescue missions.

By far the biggest problem facing these people is where they can relocate to. Those living in slums are already in poverty, and can’t afford to live elsewhere. As a result, a portion of the population remains in the dangerous slums, in the hope that government assistance will arrive.

As the director of the ONPC Kili Fiacre said, “There is no other way. They have to be evicted. We know there is the problem of poverty and it is difficult to relocate the population, but I think we don’t have a choice.”

It remains to be seen how many people will be relocated (by their own choice or otherwise) from their homes in the slums. However, this recent flood is just another reminder of the poor quality of the Ivory Coast’s infrastructure and disaster preparedness. Unless drastic measures are taken, heavy flooding will continue to be a problem  for the country and its citizens.