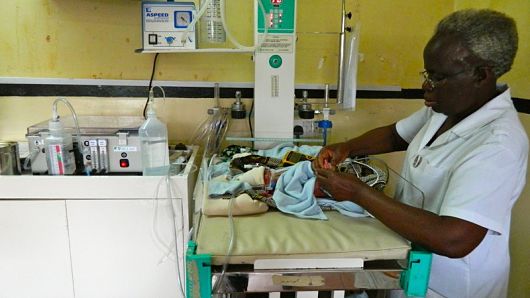 The birth of a child is supposed to be the happiest moment in a parent’s life, but this moment can soon turn into tragedy if a child dies due to lack of necessary equipment. For several parents in certain regions of Africa, this is a reality.

Babies born prematurely struggle for every breath because their lungs are so undeveloped. In developed countries such as the United States, there is technology that can help newborns survive, but in developing countries such as Africa, these luxuries do not exist. This is why students at Rice University set to work to solve this real world problem using nothing but a box and a fish tank pump.

This combination is made to model a CPAP, or Continuous Positive Airway Pressure machine, which is utilized in developed countries. The difference between a CPAP machine and a simple oxygen breathing tube is that the CPAP provides both oxygen and a small amount of pressure to inflate the baby’s lungs and allow them to begin to function on their own, rather than merely providing them with air. A typical CPAP costs around $3,000 but the students’ version is only $350, which provides massive savings to hospitals in need.

The invention is all part of a program through the university that encourages students to create inventions and test them in the real world. In this case, the students tested their invention in Malawi, a country with one of the highest preterm birthrates, around 18 for every 100 live births, and they saw real progress. The survival rate of premature babies increased from 43 percent to 71 percent.

The CPAP was initially designed in a simple box from Target but after performing these field tests, it is now housed in a metal compartment. This increases the durability and longevity of the product, especially in the harsh African climate.

Several neonatal specialists have reviewed and utilized this new invention and are pleased to report that it is just as good as the actual machine. A CPAP machine provides enough air to inflate the baby’s lungs and circulate the air through. The fish pump in the students’ invention acts in the same way, and it has the perfect amount of air flow so it is able to remain at exactly the right level.

So far the fish pump breathing aid has been utilized in nine hospitals, mainly in Malawi. Most of these hospitals have very outdated equipment and limited staffing – one nurse may be tending to over 40 patients – so this new, cheap invention has given them the technology and extra funds they need to save as many lives as possible.

Although this pump is very well equipped to save lives, it is facing some push-back from the communities since many locals associate breathing tubes with death. Hopefully, over time, families will come to the realization that this is an invention that can save children’s lives and pump life back into their beloved communities.