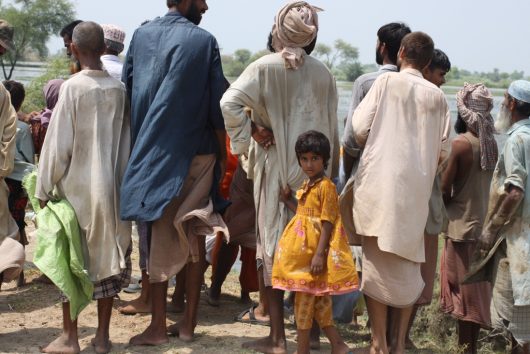 According to a  2016 report published by the World Food Programme (WFP), Pakistan produces enough food to feed all its citizens, yet, six out of 10 Pakistanis are food insecure. The worst off are women and children under the age of five, nearly half of whom are malnourished.

A tragic manifestation of this statistic is in the Tharpakar district of Pakistan. Within the first fortnight of 2016, 55 children in this region died as a result of malnutrition, pneumonia and other preventable diseases. Further, at least 650 children have died of the same causes over the last three years.These chilling figures bear more than a cursory investigation.

The International Food Policy Research Institute’s (IFPRI) food security portal cites the main cause of widespread hunger in Pakistan as “a combination of militant activity, natural disaster[s], and economic instability”. These factors are particularly devastating in a country where the agricultural sector employs almost half the workforce and contributes over a fifth of total GDP.

The destruction caused by the 2010 floods in the Indus river basin bear testament to the catastrophic nature of the aforementioned elements. According to the WFP, the floods left almost 20 million people without access to food, which damaged the country’s agricultural sector. Bloomberg estimates that  sugar, wheat and rice crop worth $2.9 billion were ruined within three months of the flooding. Massive inflation and unemployment caused by militant activities in the region worsened the impact of their destruction.

Government acknowledgment of inaccessibility and insecurity plays a huge role in, at the very least, creating a starting point from which larger policy changes can be affected. Unfortunately, this seems to be a far-fetched goal. According to the Sri Lankan Guardian “Two provincial ministers who visited [Tharpakar] blamed underage marriages and carelessness of mothers for the child deaths…Despite print, electronic and foreign media all reporting the same child death statistics, the government continues to deny the figures.”

Therefore, raising awareness about the problem both in Pakistan as well as on a global level to pressure the government to be more proactive becomes incredibly important. The WFP is playing their part by releasing statistics to be shared on Twitter and other social media sites. In addition, WFP also partners with the Pakistani government in assisting malnourished children, pregnant women and nursing mothers, helping over 3.6 million people as of April 2016 through endeavors such as providing staple foods in schools across Federally Administered Tribal Areas (FATA) agencies.

An early warning system for disasters such as the flood and subsequent earthquakes in the region would be a huge step forward in ensuring that stored crops are protected from their impact, which would help to combat hunger in Pakistan. And, taking a page from neighbor India’s book, passing a food security bill intended at providing vulnerable populations with subsidized grains could also help reduce malnourishment and insecurity, particularly among children and mothers.

While prospects for improving the situation in Pakistan have looked bleak in the past, NGOs such as Thali, Micro Nutrient Initiative and Action Against Hunger in partnership with the WFP, are making strides in reducing hunger in Pakistan. For the children of Tharpakar, even these baby steps are huge leaps into a healthier future.