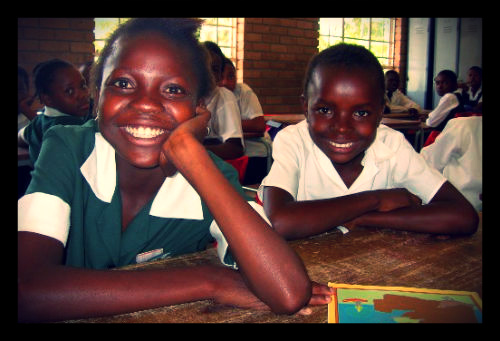 The second United Nations Millennium Development Goal (MDG), a set of targets to bring about the end of global poverty, agreed to by 182 nations around the world, focuses on achieving universal primary education by 2015. Illiteracy is both a cause and effect of poverty; lack of education prevents those living in poverty from entering high paying job sectors, and living in poverty prevents many children from being able to attend school. This cycle reinforces long-term underdevelopment. As of 2011, 123 million children worldwide lacked basic reading and writing skills; 61 percent of whom were girls. To achieve the education MDG by 2015, many organizations have started literacy programs to help young children learn to read and write, giving them a chance to escape poverty.

School aged children who are living in poverty face bigger issues than many of their peers, which is one reason why they have a harder time focusing and succeeding in school. Many of their challenges include lack of food and housing, poor health and unsafe environments. These problems not only limit the students’ exposure to books and language, but they also dominate the children’s primary concerns. For this reason, international literacy organizations are not only seeking to provide books to these children, but safe and nurturing learning environments as well.

Global Literacy Project, Inc. collects, sorts and ships literacy materials throughout Africa, Asia and the Caribbean. Their educational and service learning programs are targeted at improving knowledge of children’s cultural, literary and historical traditions. They work with established governments and community initiatives to invest in schools and communities, improving not only the learning environment for children, but their living environment as well.

According to ProLiteracy, social change starts with literate communities. The organization’s goal is to reduce poverty, improve health and human rights by promoting literacy. Unlike other programs, ProLiteracy targets adult education and has helped 2.2 million adults learn to read. They partner their literacy programs with activism and jobs, employing their students while they learn to read and write.

Illiteracy affects women more than men in developing countries. According to Save The Children, two-thirds of the world’s 880 million illiterate adults are women. They explain that social and religious traditions are often barriers to education for young girls. Many of them do not want to walk the great distances it takes to reach local schools for fear of being kidnapped or raped. When they are old enough to help in the home, many young girls are kept away from school to help their mothers until they are of age to be married off. Save the Children’s Literacy Boost program, which works in Africa and Asia, seeks to combat the gender disparity and improve literacy for whole communities, not just children. They measure children’s reading skills by how well they know their alphabets, sound out words and letters and read and comprehend sentences. Based on these measurements, Literacy Boost then trains teachers and parents on how to best meet the needs of their children. They provide libraries, or “book banks,” and educational supplies to communities to encourage involvement in the education of their children. The success of the program is seen not only in reading comprehension but in math scores as well, showing that improved literacy helps children learn better.

Poverty and illiteracy is a major issue in the United States as well, particularly for immigrant families. According to the U.S. Census Bureau, more than 20 percent of children in the U.S. are currently living in poverty. This comes out to about 15.5 million children. First graders who come from low-income families have 50% smaller vocabularies than their peers. To combat this disparity, the Reach Out and Read program was started in hospitals and medical clinics across the United States. Reach Out and Read provides books to children, aged newborn to five, through their doctors during their bi-annual check-ups. The program serves almost 4 million low-income children in over 5,000 clinics across the U.S. Though each child only receives about 10 books total through the program, evidence has shown that even this limited exposure has had a large impact.

Children who were served by the program had a six-month developmental edge over their peers in preschool years. This proves that exposure to books and language at a young age, however minimal it might be, does improve literacy in young children.

The good news is that literacy rates around the world are improving. According the United Nations, in 2011 the number of primary school aged children who were not attending school was 57 million, down from 102 million in 2000. Primary school enrollment in developing regions around the world reached 90 percent in 2010; a stark improvement from 82 percent in 1999. Gender gaps in education are also improving. In 1990, only 90 young women were literate for every 100 young men. As of 2010, that number grew to 95 girls for every 100 boys.
These trends are encouraging, and if present success continues, there is a very good chance that children all over the world will be able to have access to primary education by 2015.