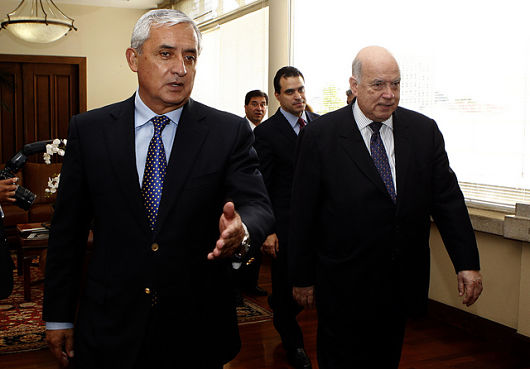 The April 23 decision by Guatemalan President Otto Pérez Molina to renew the mandate for the International Commission against Impunity in Guatemala, or CICIG, creates substantial inroads for poverty reduction in the country.

CICIG is an effort by the United Nations to “eradicate illegal groups and clandestine security structures that operate in Guatemala.” CICIG has been working in the country since 2007 to strengthen institutions that can successfully challenge illegal criminal networks and bring an end to the fraudulent governance practices that plague the country.

Otto Pérez Molina — who back in March was reluctant to extend the CICIG mandate into 2017 — made his decision amidst a tax scandal that sparked protests across the country. The U.S. State Department officially welcomed the President’s change of heart, and for good reason.

Inept institutions and corrupt officials seriously hamper with a country’s development machinery. Poor investment climates, macroeconomic volatility, mismanagement of public funds and the struggles of doing business, just some of the repercussions of corruption, impede growth and contribute to poverty. A 2005 study put the cost of global corruption at around $1 trillion annually.

A great poverty reduction target then, for the $25 million the U.S. Government has contributed to CICIG since 2008. These funds have supported the UN prosecuting body in the investigation and litigation of over 50 high-level cases ranging from embezzlement to drug trafficking and murder. CICIG’s involvement has been crucial in subverting the power of criminal groups, as Guatemala’s institutions are incapable of tackling corruption on their own.

Without extra-judicial assistance, an incapable government and organized crime would continue to distort markets, deliver desperately needed public services inefficiently and restrain the potential for human capital led growth. In a country with such high rates of poverty and income inequality, this is a shame. In 2011, the World Bank put the percent of Guatemala’s population living below the national poverty line at 53.7 percent. The most recent data, also from the World Bank, ranks Guatemala as the second most unequal country in Latin America with regards to income—a reflection of its high level of corruption.

However, Guatemala is not unique in the region. Honduras and El Salvador also experience entrenched corruption, which has created a breeding ground for violence in the so-called Northern Triangle, a region comprised of the three aforementioned States. Experts believe the violence has been fueling the flow of child migrants from the Northern Triangle to the United States.

Ending impunity and building capacity for public institutions in Guatemala will curb violence, unlock growth and reduce poverty. If success continues, this approach can be a model for the whole Northern Triangle.

In the context of a proposed $1 billion aid package for the Central American region in 2015 and the Obama administration’s request for $3.7 billion in border security measures, the continued presence of CICIG in Guatemala represents a small but powerful way for the United States to fund development in the region.

Malaria on its Way Out; Good News to Come Afghanistan’s Rule of Law and Future Can Flourish
Scroll to top