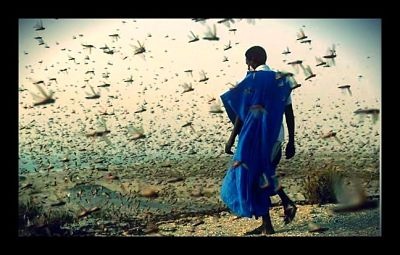 As though part of some biblical plague of the ancient world, the recent swarms of invading locusts have wreaked havoc on the crops of many North African countries. In an effort to both stem the flow of the relentless Lucusta migratoria and prevent future flare-ups, the Food and Agricultural Organization (FAO) has donated 1 million dollars to help fight the locust crop destruction in Sudan.

The funds, which resulted from joint cooperation of donors that included $400,000 from Saudi Arabia, $75,000 from the CRC’s emergency trust, and $500,000 from the FAO, will serve as a much needed shot in the arm in the ongoing war against the locust crop destruction in Sudan. The locusts, which began their migration back in February, initially did little damage to the Sudanese agricultural industry. However, the previous swarms laid eggs across much of the county, and like a ticking time bomb are expected to hatch risking further locust crop destruction in Sudan, which could decimate their spring and summer harvests.

The recent allocation of funds from the FAO is great news in the continuing effort of preventing further locust crop destruction in Sudan. Furthermore, through the combined funding of several generous donors, along with the agricultural expertise of the FAO, countries such as Sudan that have been dealing with the ravages of the locust swarms can now look forward to some much-needed relief.