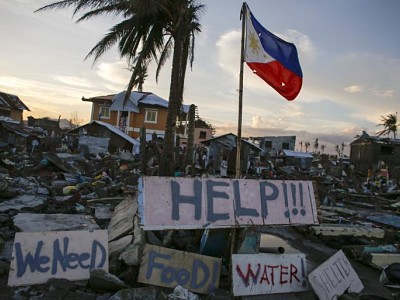 With global climate change causing increasingly frequent and severe natural disasters around the world, people in disaster-prone regions often find themselves without the resources to recover damaged property or develop increased resilience to future disasters. Those people are often left without the means of repaying high-interest loans or in a state of dependence on nonprofit organizations for access to basic necessities.

In November 2013, the Philippines was struck by Typhoon Haiyan, the most destructive storm to hit land on record. The storm resulted in the deaths of over 6,000 people and caused nearly $15 billion in structural damage, affecting the lives of over 4 million Filipinos. The city of Tacloban reported that 90% of its structures were either damaged or entirely destroyed, resulting in the displacement of thousands of civilians into surrounding areas. That damage included the devastation of entire livelihoods; the coconut industry, upon which many Filipinos depend for income, saw 80% of its crop base destroyed.

Such damage generally leaves relief for disaster victims to the discretion of external organizations and donor countries. But recent revelations about the lack of accountability in post-disaster aid operations like those in Haiti have raised doubts of the efficacy of such donations. This has presented a new challenge for development and relief organizations: how can people in disaster-prone regions decrease their reliance on relief aid and increase their capacity to recover lost property and resilience to future disasters?

After Typhoon Haiyan, Mercy Corps provided Filipinos with unconditional electronic cash transfers and access to long-term financial services in order to provide households and businesses more freedom to spend relief money. This allowed them to recover lost investments in addition to purchasing basic necessities like food and water. Unconditional relief also liberated recipients from the bondage of high-interest loans that they are often otherwise forced to pursue.

Beyond the immediacy of property recovery, financial services provide households and village-level businesses access to savings and insurance products to protect their families and investments from future disasters.

“[L]oans allow people to diversify their sources of income into ones that aren’t as prone to disaster damage. Insurance can help them access cash in the event of the death of a primary income earner, or if their property is destroyed,” wrote Mercy Corps workers Anna Chilczuk and Thea Anderson in an article for The Guardian. “And having savings means people have money to buy what they need immediately following an emergency.”

One example is affordable agriculture insurance, which helps rural farmers whose operations are threatened by conditions beyond their control, such as the coconut farmers in the Philippines. Because agriculture is the main source of income for many rural communities (over 2 billion people depend on “smallholder” farms for income), farmers often have to take out loans to maintain and invest in operations. Disasters like Typhoon Haiyan often leave them without the means for recovering lost investments or repaying high-interest loans. Insurance coverage for those farmers makes it more likely for credit to be extended to them on reasonable terms, increases their capacity to repair damaged land and promotes resilience to future disasters.

While regions like Southeast Asia are prone to natural disasters like Typhoon Haiyan, demand for access to long-term financial services provides an opportunity for American investors to establish a presence in those increasingly stable markets. As households and local businesses become more able to build resilience to future disasters and establish economic stability, those markets will become less vulnerable to natural disasters. That will allow civilians to become more financially autonomous and less dependent on the discretion of external donations from organizations like Mercy Corps.

Pakistan Backtracks on Shutting Down Save the Children How Many Senators Are There?
Scroll to top