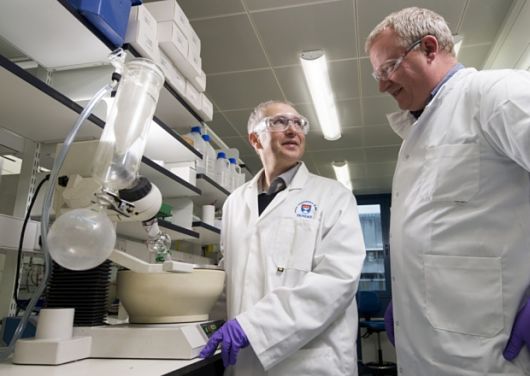 An international group of medical scientists and vaccination experts have announced the discovery of a new class of antimalarial compounds capable of killing malaria parasites in an alternative method than currently observed in other medications. The team of researchers has expressed hopes that the discovery of the compounds will someday lead to a single dose cure or preventative vaccine for malaria that would cost as little as $1.00 US.

Dr. Ian Gilbert and his team of colleagues of the University of Dundee in the UK, in collaboration of the Medicines for Malaria Venture, discovered that the compound now named DDD107498 is capable of killing Plasmodium Falciparum, the species of the Malaria parasite considered most deadly, through targeting a molecule considered essential for protein synthesis.

In an interview regarding the discovery of the new compound, Dr. Gilbert eagerly reported, “This is an exciting new compound. It works against multiple life-cycle stages and has the potential to be an important medicine in the battle against malaria.”

With over 198 million cases of malaria worldwide recorded in 2013 and nearly 600,000 lives lost, mostly children who lived within sub-Saharan Africa, the race to discover a “miracle” malaria medication is tireless. Many scientists are exciting about the discovery of a compound that can fight Plasmodium Falciparum, as this form of malaria is especially dangerous due to its innate ability to develop resistances to various anti-Malaria drugs. The new anti-Malaria drug will be stronger against the parasite.

Through the analysis of over 4,700 compounds, the scientists learned that DDD107498 held the capabilities to fight malaria. Dr. Akhil Vaidya, a malaria research scientist at the Drexel University College of Medicine, reported that, “’The drug DDD107498 appears to have excellent pharmacological properties that would make it possible to devise a single dose cure for malaria, as well as to prevent malaria. It is also important that the drug works against various stages of the parasite, thereby making it possible to be used as a transmission blocking drug.”

The team of scientists hopes to determine an effective partner drug for DDD107498, as this compound is considered a relatively slow-paced killer of the Malaria parasite. Dr. Vaidya believes that combining the compound with a fast-killing drug would be the most suitable solution.

The pharmaceutical company Merck Serono has now adopted the development of the compound, which is currently undergoing critical stages of safety testing. Dr. Gilbert hopes that the first human clinical trials will begin within a year, and the drug will be available for consumer medical treatments within five to six years.

Dr. Michael Chew of the Wellcome Trust, a funder of the research being conducted, has claimed, “The need for new antimalarial drugs is more urgent than ever before, with emerging strains of the parasite now showing resistance against the best available drugs. The discovery of this new antimalarial agent, which has shown remarkable potency against multiple stages of the malaria lifecycle, is an exciting prospect in the hunt for viable new treatments.”