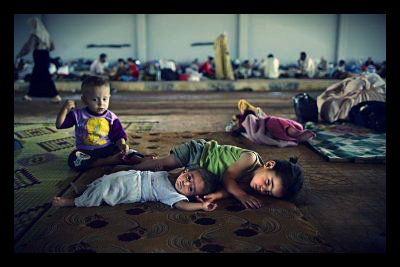 The nation of Syria has endured ongoing violence with tension between the Syrian government and people. The situation has long been called a human rights disaster and numbers are beginning to show the extent of the issue.

According to a Human Rights Watch report, a total of 145 hectares of developed land including neighborhoods and towns (about 200 soccer fields worth), have been completely demolished. The areas have contained opposition hubs and the Syrian government has used large-scale explosives and bulldozers to wipe them out.

Because of the extent of the situation in Syria, there is expected to be a lost generation of Syrian children. There have already been thousands of refugees forced to leave, which has put a strain on the surrounding nations that are dealing with economic burdens.

Currently, organizations on an international scale are beginning to step in to alleviate the situation. The United States has already addressed the human rights situation in Syria and plans to mobilize USAID to respond to refugee needs. As of January 28, members of Parliament for the European Union convened to reach a resolution on the action regarding the lost generation of Syrian children.

Ultimately, with the inclusion of UNICEF and cross party EU committees, they established the goal to “create synergies across committees and incorporate children’s rights into the legislative body.” Spanning back to the start of the situation in Syria, the EU has already mobilized a total of over 2.7 billion in assistance—and now they are planning on utilizing the legislative system to prevent the lost generation.

As violence in Syria continues, the future of the nation looks dreary. So far there have been over 2.4 million registered refugees with almost 50 thousand refugees awaiting registration for assistance. With the assistance of the entire international community, the situation in Syria is expected to continue to be addressed. So far, much has been done to respond to the humanitarian needs of the people; ultimately, it may require a more of a political approach to resolve the issue.