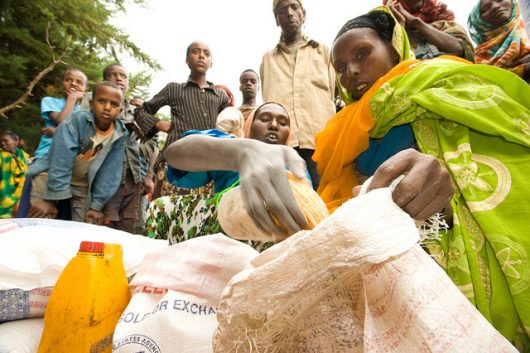 Ethiopia is an Eastern African country with a population of over 102.4 million people. Since 2000, Ethiopia has undergone a consistent period of growth with an overall rise in income and a significant reduction of poverty. Improvements continue in disease reduction and economic growth.

The country itself has one of the lowest income-inequality levels in the world. However, despite the positive development of the nation, Ethiopia is estimated that almost 23 percent of Ethiopians still live at or below the poverty line.

Agriculture is the largest sector within Ethiopia’s economy, making up over 35 percent of the GDP. The vast majority of the agricultural industry in Ethiopia consists of smallholder subsistence farmers.

These peoples’ income depends on the climate of the region and the health of the land. In the past decade, climate shocks such as droughts have become an increasing occurrence in Ethiopia, endangering the livelihood of these farmers and others who depend on their product.

Despite being among the top producers in Sub-Saharan Africa, Ethiopia’s wheat production fails to keep pace with other producing countries. For many years Ethiopian wheat yields have remained lower than those of other countries, falling to more than 30 percent below the world average in 2012.

Wheat imports account for 40 percent of wheat consumption in Ethiopia, and this amount is still insufficient even in conjunction with the quantity of wheat produced within the country on farms. In fact, demand for wheat has increased as Ethiopia experiences population growth and a rise in wheat-based food preferences.

In 2017, it was reported that over eight million Ethiopians face unreliable access to the necessary quantity of food and nutrients. Wheat is an essential part of the Ethiopian diet and is considered to be the third most important staple food crop.

In 2013, the Ethiopian Agricultural ministry and the Agricultural Transformation Agency implemented a new program known as the Wheat Initiative to help improve the productivity of wheat production for smallholder farmers in Ethiopia.

The program introduced new techniques and recommendations for growing wheat that are already utilized globally to approximately 400,000 farms. The goal of this project was to improve productivity for all farmers by spreading techniques and ideas to improve Ethiopia’s wheat production.

The Wheat Initiative provided a package approach to implementing the program. Farms would receive information on techniques, supplies and even marketing plans that could help with the production and sale of wheat.

These suggestions from the Wheat Initiative included the use of the row planting method, a reduction of seeding, and instructions on the use of fertilizer. Many of these farms also received a day of training and vouchers for supplies. An important aspect of the program was the enhancement of the availability of improved seeds and fertilizer, provided by the vouchers.

A study of the experimental Wheat Initiative program completed by the International Food Policy Research Institute in 2016 revealed that the farmers who received the entirety of the program instruction — with a one-day training session and vouchers — increased their wheat yields by 14 percent.

This increase occurred despite a margin of farms in the study that did not fully implement the suggestions in the initiative program.

The wheat yield growth seen in smallholder farms indicates that the use of known agricultural techniques and improved seeds can significantly help farmers in Ethiopia increase their productivity. The methods supported by the Wheat Initiative can help the majority of Ethiopians in their day-to-day lives with increased income and better food production.

If these practices continue to spread and are implemented across the country, they could lead to improvements in Ethiopia’s wheat production and in the lives of the majority of Ethiopians.