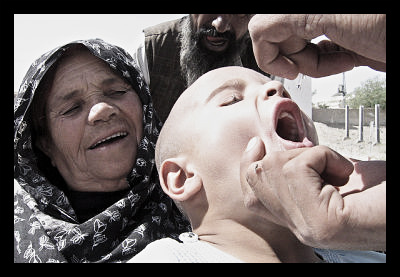 Two years into a ban on polio vaccinations implemented by Tehrik-i-Taliban Pakistan (TTP), the Pakistani Taliban branch, the number of cases of children with polio in Pakistan has risen dramatically. Compared to 58 cases in 2012 and 72 in 2013, there are 257 cases in 2014 so far.

The ban was put into place in northern Pakistan, or the tribal belt where the Taliban has control, in retaliation for U.S. drone strikes in the area. The group says it will lift the ban when the strikes stop.

Polio only remains endemic in three countries: Afghanistan, Pakistan and Nigeria. At the height of infection, polio affected over 350,000 people. In 2013, there were 416 polio cases reported worldwide. Projections say this number will rise in 2014, largely because of an extreme uptick in cases in Pakistan.

Pakistan has been very aggressive in the eradication of polio efforts, with health workers going as far as setting up roadblocks for vaccine stops and boarding public buses and trains to vaccinate any child that looks to be under five years of age. The country also runs regular vaccination campaigns in both its rural and urban regions, reaching hundreds of thousands of people in a matter of days.

Nonetheless, Pakistani health officials estimate that there are roughly 300,000 children living in the tribal belt along the Afghan-Pakistani border that are missing their vaccinations. This region is largely rural and in extreme poverty.

The TTP has stemmed the number of children receiving polio vaccinations by using propaganda and bans against vaccinations, as well as committing violence against health workers. Since 2012, 61 health workers and accompanying security personnel have been killed in Pakistan and countless attacks and instances of intimidation have occurred. TTP claims responsibility for most of these actions.

Much of the pushback against vaccinations stems from a mistrust of the West and the U.S. after a CIA operation was revealed that involved a Pakistani doctor named Shakil Afridi. Afridi pretended to conduct a vaccination campaign while looking for information on the whereabouts of Osama Bin Laden. This, coupled with dangerous and consistent drone strikes, gives the Taliban enough firepower to shoot down any vaccination campaigns.

Because of violence, poverty and insecurity along the Afghan-Pakistani border in the north, many people have moved farther into Pakistan, raising the risk of more cases of polio in unvaccinated children.