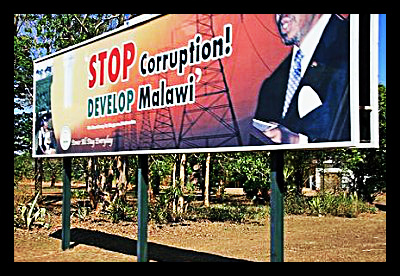 Cashgate, coined after the Watergate scandal of the 1970s, refers to the theft of $250 million by civil servants of the Malawi government. The president of Malawi, Joyce Banda, has responded to the corruption by firing her cabinet; however, this has not solved the problem.

Since the scandal erupted more than a month ago, the Anti-Corruption Bureau (ACB) has arrested numerous public officers for defrauding the Malawi government. Most recently, the ACB has arrested employees from the Ministry of Finance, the Ministry of Tourism and Culture, and more.

International aid donor organizations are responding to the scandal by withholding aid to Malawi. The European Union, Department for International Development (DIFD,) Norway, and the Common Approach to Budget Support (CABS) have all suspended or withheld aid to Malawi. These actions are likely to cause problems in Malawi, as 40 percent of the nation’s budget stems from donor aid. Sarah Sanyahumbi, co-chair of the CABS group and head of the DFID in Malawi, assures that all development support will not be stopped.

“It’s budget support and sector budget support (that has been affected.) So all other programs or projects, like in health, education, food security, etc. etc., are still ongoing,” she stated. However, Finance Minister Maxwell Mwezalamba is convinced that the suspension of aid will lead to the downfall of the country. The International Monetary Fund is currently investigating the Cashgate scandal. Once Malawi has made a significant commitment to eliminate corruption within its financial system, the country may earn back foreign aid, but in the meantime, Sanyahumbi states there is “no turning back.”