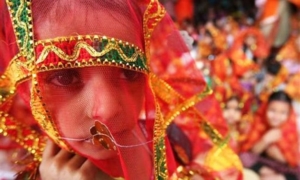 Their initiative, Girls Not Bridges, has connected 80 civil society organizations based throughout the world.

In Bihar, girls are typically married off at a young age. Most are unable, as well as unprepared, to have children of their own. Early marriages result in early childbearing, resulting in frequently premature and underweight infants. Complications during pregnancy and childbirth are also common.

Moreover, girls who marry young often don’t receive an education. This is a detriment to the Millennium Development Goal of attaining universal education.

In Bihar, UNICEF works to ensure that girls are educated. For instance, Nari Gunjan, one of UNICEF’s partners in education, with the help of Sister Sudha Varghese, started a learning center in India. This learning center provided many girls with access to education that they were previously denied.

Several of these girls were able to write their own autobiographical essays from the education they had received at the centre. Rinku Kumari wrote about her early marriages and lack of education. Her father married her to a boy from a neighboring village when she was only 15 years old.

“I was keen to study right from my childhood but there was no opportunity.  It was only when a Nari Gunjan centre opened in my village that I joined it with the permission of my father,” Rinku wrote.

However, Kumari’s husband did not allow her to attend school for long. “Though my mother-in-law allowed me to attend classes at the centre, my husband stopped me from going there.  He threatened to break my legs if I disobeyed him,” Rinku wrote.

Buna Devi was 13 years old when she was married off. “When I went to the Centre, my neighbors would comment, “Look at this old woman with two children.  She is going to study now, at this age!”  I never replied to them but silently pursued my goal,” she wrote.

Hopefully, Girls Not Bridges will help UNICEF ensure that girls like Rinku and Buna aren’t married off so young, but instead are able to receive an education.