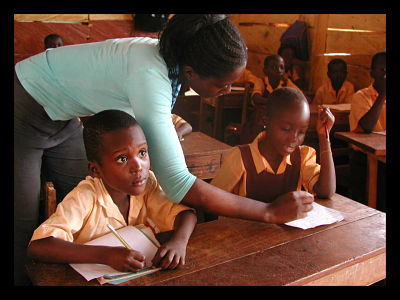 One of the Millennium Goals is to ensure that all the children of the world are enrolled in school and are receiving a quality education regardless of their economic standing. A good and applicable education is the best tool we have for pulling people out of poverty and ensuring that they are able to thrive on their own. Yet this issue could have been solved already and is has not been fully addressed. Almost a billion people entered the 21st century unable to read or write their name. But if just one percent of the funds used in the world to purchase weapons every year had been used towards education, every child in the world could have been in school by 2000. Unfortunately it did not happen and we are pressed now to reach the 2015 mark for ending poverty and increasing education.

Malala Yousafzai and other activists have really helped to bring the issue of a right to education forward in the minds of others, but more still needs to be done. Many countries still struggle with their school programs, even if they did show initial successes, Afghanistan, for example, has had a lot of work put into their education system and yet they still fight to keep enrollment levels and quality levels up. According to an article in the New York Times, there are problems with widespread drop-outs, low levels of education, and serious overcrowding.

Most Afghan schools operate in split-shifts so students only get half or even a third day of school every day because there are too many students for the number of available teachers. UNICEF estimates that even with all the overcrowding and the raising demand for schools and teachers, only half the children who are enrolled actually show up for class. In fact, school administrators receive compensation for having higher levels of enrollment and are likely to boast exceptional numbers of and show great improvement, while in reality the number of students physically going to school is still dismally low.

Once a student shows up for school in Afghanistan, their teacher may not even be qualified. About 24% of all teachers in the country are properly trained according the Afghan law. The rest may not even have a complete high school education or still attend school themselves. But Afghanistan is not the only country with this type of issue. South Africa has a 30 to 1 student-teacher ratio and their schools show very high enrollment rates in the first grade. So the demand seems to be high, but by the twelfth grade the percentage of students enrolled in ordinary schools drops from 9.7 in first grade to 4.4 and then to 0.1 percent of students enrolling in higher education.

Yet, South Africa is taking control and working to provide the means to the end with a plan called Action Plan to 2014. It consists of 27 structured goals the school system wants to reach by 2014 in order to guarantee that all children in the country are receiving a complete education. Educators and government officials are focusing on ensuring that all students will go to school on time every day and will have completed their school work and homework. South African officials realize that too many children are spending time in school without mastering the skills they are supposed to be learning.

To the north in the Horn of Africa, Ethiopia has made great strides in their education program thanks to sustained government commitment and greater community involvement. In fact 5.5% of their GDP is devoted to education, one of the highest in the country. They have also done a number of things to help the students and their families, like abolish the school fees for primary and lower secondary schools. As well as invest in alternative education for those living in remote areas and literacy programs for adults who were unable to complete school as children.

As a result of the government taking the time to focus attention on education program with the building of schools, training of teachers, and creation of parent-teacher associations, Ethiopia is celebrating all time highs for enrollment. As of 2011 only one in five primary school-age children were out of school with almost completely equal amounts of boys and girls attending. The rise in education has coincided with a reduction of poverty and an improvement in food security and overall health.

While it remains to be seen if the world can complete the Millennium Development Goals within the allotted time span and it is clear that a lot of work remains to be done, success stories are real. With every innovation, with every donation, and with every pledge to make a difference the world is one step closer to making equal access to education, and the eradication of extreme poverty, a reality.