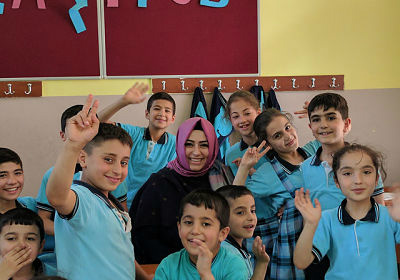 In March 2017, the European Union (EU) and United International Children’s Emergency Fund (UNICEF) announced a new partnership with the Turkish government to address the issue of education for Syrian refugees in Turkey by initiating a program to provide 230,000 additional Syrian refugee children in Turkey with educational opportunities.

The initiative announced by the EU, UNICEF, and the Turkish government is a Conditional Cash Transfer for Education (CCTE). The CCTE, inaugurated in May 2017, provides refugee families with bi-monthly cash transfers. The cash transfers are targeted with the goal of encouraging 230,000 more children to regularly attend school. The overarching goal is to ensure that there is “no lost generation” of Syrians.

UNICEF Executive Director Anthony Lake noted that education is especially needed in emergency situations so that the refugees can one day rebuild their lives and their countries.

Education for Syrian refugees in Turkey is difficult to implement for multiple reasons. The language used to teach in schools in Turkey is Turkish, while most Syrians grew up learning and speaking Arabic. Also, many Syrian refugee families do not have the financial resources to send their children to school.

Besides the CCTE, many organizations are working to better provide access to education for Syrian refugees in Turkey. In 2016, UNICEF, supported by the EU, aided 12,600 Syrian children by safeguarding their crossing of conflict lines so that they could sit their national examinations.

The Turkish Ministry of National Education and UNICEF have held teacher training for 20,500 Syrian refugees. The aim is to instruct Syrian volunteer teachers with pedagogic skills under the guidelines of Turkish teacher training standards. This aids the teachers who often teach in overcrowded classrooms and have many students with post-traumatic stress disorder (PTSD).

One Syrian volunteer teacher, Osama Ayat, relates to his students by telling them stories about his hours spent learning the Turkish language. He says he makes them laugh and emphasizes that teachers can empower their students.

Ayat and his students are one example of individuals benefiting from the strides that multiple organizations make to guarantee education for Syrian refugees in Turkey.

How Agsol Brings Power to Poor Farmers A New Reality: The Progress of Education and Development in Ethiopia
Scroll to top