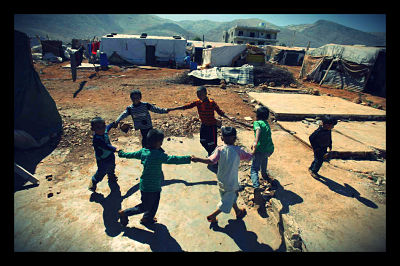 The crisis in Syria has garnered international attention, but arguably little intervening military action; the majority of concerned nations are opting for relief aid for innocent people. Refugees have been tended to by neighboring countries and various international aid givers. In September 2013, the UN set aside $50 million in support of aid groups operating on the ground in Syria, Lebanon, and Jordan.

TheHuffington Post reports that the dollar amount is the most the UN has ever allocated for one crisis. Now, UK teachers are partnering with those in Syria and neighboring countries to address the many displaced children to help ensure the crisis doesn’t rob them of an education.

The official numbers of those displaced by the Syrian civil war are somewhat skewed. The United Nations High Commissioner for Refugees (UNHCR) places the number at 600,000, arguably a conservative estimate. Inside Syria, that number may be 5 million, according to Paris-based Syrian political observer Salam Kawakibi.

Child refugees are especially vulnerable and at risk for, “…exploitation including early marriage, domestic violence and child labor, despite efforts to keep them in school, the U.N. Children’s Fund (UNICEF) said…” A Voice of Americareport says that 2.1 million children have crossed borders into surrounding nations, many lacking key family connections. Living in host communities outside Syria, children are very at risk for exploitation and are even joining Syrian rebels to fight; they also have less access to education.

In Jordan alone, only 80,000 of 200,000 refugee children consistently go to school.  UNICEF is giving $45 to refugee families in Jordan to keep children in school. The United Nations Educational, Scientific, and Cultural Organization (UNESCO) and the European Union (EU) have also combined forces for a 4.3 million Euro effort to help Jordanian schools and teachers deal with the Syrian influx, helping make education possible for locals and refugees.

Director Education and Society at the British Council Dr. Jo Beall says the partnerships will give British citizens a role in assuaging the crisis for kids and teachers by offering them a better understanding of the issues and the opportunity to connect with Syrian students. An Evening Express report claims that Skype and exchanging letters will help make those connections.

The UK announcement comes on the heels of the urging of Malala Yousafzai for world leaders to educate Syrian child refugees. Malala and UN education envoy Gordon Brown received $1 million from Avaaz in September 2013 to draw more international attention to this specific issue. Brown, a former British Prime Minister, echoes the sentiment of Secretary Greening in not wanting Syrian refugee children to become lost in the face of civil war.

Malala’s Weapon of Choice Revealed on The Daily Show What is Measure DHS?
Scroll to top