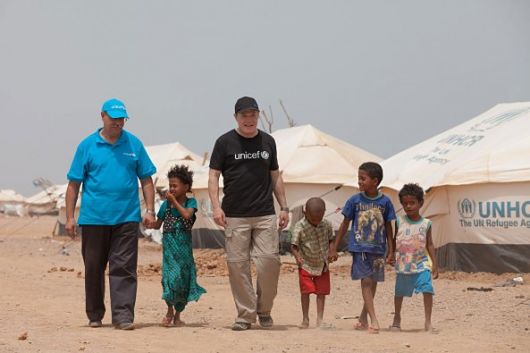 Izzard, a UNICEF UK Ambassador, met with child refugees who escaped the ongoing civil war in Yemen, Izzard’s country of birth. The children he spoke to fled their homes with nothing, traveling across the Red Sea by boat.

According to UNICEF UK, more than 20,000 people, including 10,000 Yemenis, have taken the journey across the Red Sea into Djibouti since March. Many of these Yemeni refugees are living in Markazi, a refugee camp outside the city of Obock.

“For decades, the children of Yemen have been living in fear and danger. They are now living through the hell of civil war and many have had to flee across the Red Sea, to Djibouti via Bab-El-Mandeb – the Gate of Tears” Izzard explains.

“The harrowing stories from Yemenis, particularly those from Aden, the city of my birth, will stay with me forever. I have a responsibility to highlight this crisis to the world, and I hope I can persuade the UK public to help the 10 million Yemeni children that are in danger right now.”

Izzard wishes to help the many children caught within the turbulence of conflict—products of what he calls a “forgotten civil war”.

In his appearance for Sky News, he highlights UNICEF’s efforts, stating that with any donations the organization would be able to provide a week’s worth of nutritious food or even 60 vaccinations against polio.

Out of the 25 million total population of Yemen, he states, nine million children have become extremely vulnerable and have faced much hardship due to the ongoing conflict.

Planet Labs Images the WorldSave the Children: Healing Through Art
Scroll to top