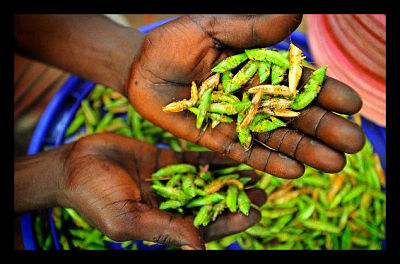 Insects have always played a beneficial role in the ecosystem by pollinating plants and helping maintain the balance of the ecosystem.  In certain cultures, insects are also a vital source of nutrients. The United Nations believes that eating of insects could be a simple way to fight global hunger, as insect farming requires a smaller amount of land than other forms of farming. This newfound interest in insects prompted MBA students at McGill University to found Aspire Food Group.

Aspire Food Group aims to build a social enterprise that allows local farmers to farm, harvest, and process insects in order to make breads and other foods.  Today, the Food Group is conducting grasshopper-farming trials in Kenya, Thailand, and Mexico in an attempt to make processing these insects more labor and resource efficient. Aspire Food Group was recently praised by The Hultz Prize and awarded $1 million for further research. Ahmad Ashkar, founder and CEO of the Hultz Prize, believes insect farming “is our chance to empower the next generation and solve some of the world’s most pressing issues.”

However, in order for this new diet to be used most efficiently, it is important to address the social stigma associated with eating insects. Harman Johar believes that this misconception can be overcome just like that of eating raw fish in sushi. Johar devotes his time to harvesting and selling dry roasted insects to people all over the country. Dr. Marianna Shockley, an entomologist at the University of Georgia, believes that the United States is not a part of the 80-85% of the world that regularly consumes insects because of the perception and the nation’s wealth. In the United States, land for agriculture is readily available. Dr. Shockley believes that the Americans should attempt to incorporate insects into their diet as they provide an alternative source of protein while creating a much smaller carbon footprint.

Harman Johar is looking for investors in his company and believes that the insect movement will take off “when the timing is right.” He believes that food shifts come in great movements such as the industrialization of food in the post-World War II era and the realization that that industrialized food is unhealthy in the late 20thcentury. He is convinced that the next shift will be towards healthy and environmentally sustainable food.