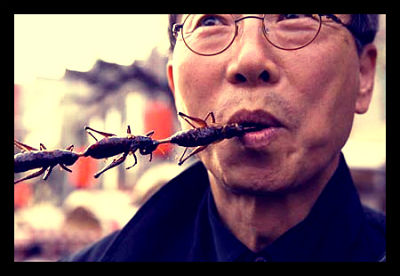 Replacing the traditional steak with a plate of sautéed crickets might just be the beginning of a solution to meeting the rapidly increasing demands for food around the world, according to the United Nations.

The U.N. Food and Agriculture Organization (FAO) said in a recent report entitled “Edible Insects,” that the world will host 9 billion inhabitants by 2050, meaning that current food production will need to double in order to nourish so many people.

As it stands, there are already 1 billion chronically hungry people today. In the coming years, that number could rapidly increase in the midst of continued overexploitation of fisheries, land degradation and climate change. To ensure current and future food security, the report concludes, the way people grow and consume food needs to change.

Eating bugs might have been the last thought on anyone’s mind – especially Westerners – but the U.N. makes the case that the “disgust factor” that keeps many from ingesting these creatures is simply a cultural barrier.

As evidence of this, the report states that around 2 billion people in Asia, Africa and Latin America currently consume 1900 different species of insects. For example, chocolate-coated bees are very popular in Nigeria, while deep-fried tarantulas are a traditional treat in Cambodia. In Indonesia, dragonflies boiled in coconut milk with ginger are a delicacy, and in Thailand, insects are found in supermarkets shelves in cookies, freeze-dried noodles, and microwavable packets and are even canned.

The U.N.’s case is further bolstered by the fact that insects have a high protein, fat and mineral content. One hundred grams of cricket, for example, contains 12.9 grams of protein, 5.5 grams of fat, 75.8 grams of calcium and many other important nutrients.

They are also extremely efficient in converting feed into edible meat. One cricket, for example, needs 12 less feed than cattle to produce the same amount of protein.

In terms of sustainability, insects take up less space and emit fewer greenhouse gases and ammonia than other animals, such as cattle and pigs. They also need much less water than conventional livestock and could be raised on human and animal waste.

Although the FAO recognizes that it is highly unlikely that caterpillar casserole might find itself on a traditional American family’s dinner table anytime soon, it does take the prospect of mass cultivating insects seriously. It even suggests that chefs and restaurant owners should help raise awareness about insects’ potential as food by including them in recipes and menus.

“Twenty years ago nobody in Europe would think of eating raw fish, and everybody now loves sushi, things can change, so even the cultures that are not used to eating insects may eventually develop a taste for them,” she said.