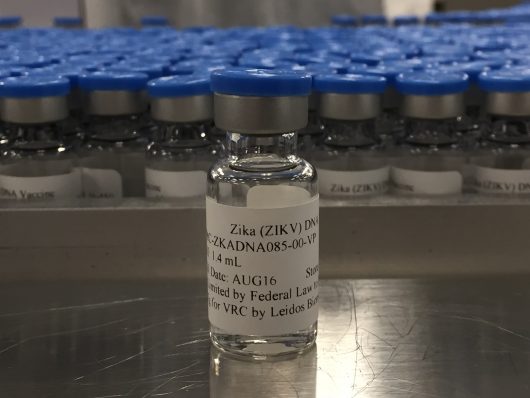 In 2015 and 2016, the Zika virus was one of the biggest health issues in the Americas. Though it is widespread in Central and South America, the virus has affected a total of 84 counties worldwide. As such, the development of a Zika vaccine is necessary to combat the spread of the virus.

The virus is spread by Aedes mosquitoes and attacks the immune system, which can lead to heart problems or death. In a few cases, Zika also caused Guillain-Barré syndrome (GBS), which damages one’s nervous system and can lead to partial or total paralysis.

A link has been discovered between the presence of the virus in pregnant women and microcephaly in their children. Microcephaly is a condition where a baby is born with a smaller head than normal, often resulting in incomplete brain development. As a result of the prevalence of the Zika virus, pregnant women and women who want to become pregnant are told to be vigilant and, in some cases, even delay getting pregnant for fear of giving birth to a child with microcephaly. This helped push researchers to attempt to develop a Zika vaccine.

This virus has remained an issue since it was brought to light; Americans have been issued travel advisories and warnings regarding the virus. So, what is being done to combat the virus in 2017?

As a result of successful trials in animals, one study moved on to test the vaccine on human subjects in April 2017. On October 4, 2017, articles were published with updates on the human trials. These trials are reportedly going well to date, as a result of all participants making antibodies, which are required for the body to fight off the virus. It was reported that the vaccine was “well-tolerated” by humans in this trial.

Developing a vaccine is important in the fields of public and global health. However, in order to develop a Zika vaccine, much more testing must be done. Various groups and firms are actively researching the virus in order to make this happen. Researchers are also debating including pregnant women in trials to combat the birth defects that result from the Zika virus.

Nonetheless, the progress achieved thus far is promising for the populations around the world who are at risk of being infected by the virus. If this vaccine is successful, many people’s lives will be positively impacted.

Approaches for Helping Refugees Through EntrepreneurshipRefugee Crisis: Helping People in Hungary Through Technology
Scroll to top