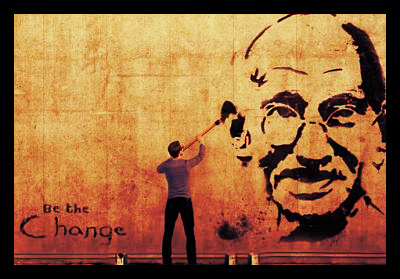 Inspired by the infamous Gandhi quote, “Be the change you wish to see in the world,” Design For Change empowers young people to bring their ideas for social change to life.

Founder of Design For Change, Kiran Bir Sethi, launched the organization in 2009 after founding the Riverside School in Ahmedabad, India in 2001. She was inspired to create her own school after her young son’s discouraging experience at his local public school. Sethi was moved to action and pushed forward with her idea of a human-centered, research-based, practical curriculum to get students excited about ethics, excellence and engagement. Thus, the Riverside School was born.

Sethi designed the Riverside curriculum with a focus on five key skills: social investment, emotional competency, cognitive skills, physical health, and spirituality. Central to Riverside’s mission is encouraging students to improve the world around them. Sethi emphasized that the school’s curriculum taught students that, “life is not being used well if it is not being used to help others.”

After seeing the results of this method at the Riverside School, Sethi developed the Design For Change Challenge in 2009. This pioneering contest used a simplified design thinking process to challenge children in India to imagine and carry out solutions to the problems around them. Teachers and supervisors documented this process and sent their materials to Design For Change, whose selection panel chose twenty winners.

That year, Design for Change was invited to be part of TEDIndia, where its work quickly became well known. Since then, Design for Change has spread to over 35 countries, helping children across the world become prepared to deal with the issues of the next generation.

Design For Change’s ‘I Can’ model of design thinking consists of four steps: feeling, imagining, doing, and sharing. Through these steps, young people use a sense of empathy to uncover the overt and latent needs of the society around them, imagine potential solutions to the problems, then re-frame their ideas using a systemic view of the field. Once the planning is complete, young people are challenged to go out and make their change happen.

This ‘I Can’ model stands in sharp contrast to the traditional global education system, which reinforces a limited mentality of achievement in young people. ‘I Can’ gives children a sense of agency and inspires them to make the world a better place. Kiran Sethi and Design For Change have made this powerful sentiment echo throughout the world.

Sources: Design For Change, Catalyst, What Design Can Do
Photo: My Modern Met