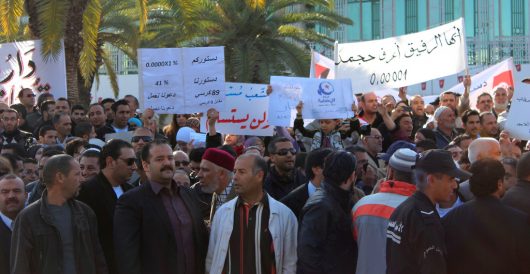 In 2010, a 26-year-old fruit vendor, Mohamed Bouazizi, set himself on fire in the rural Tunisian town of Sidi Bouzid while protesting a corrupt and undemocratic government. In the proceeding months, popular protests spread like wildfire from the inland region of Tunisia to the coastal capital, and on to Egypt and Syria.

Since then, the country has held its first successful democratic elections. Still, corruption in Tunisia has not subsided. This development has been cynically dubbed the “democratization of corruption.”

The most pernicious form of corruption in Tunisia can be found in the credit industry. In recent years, the government has received between $2 billion and $4 billion worth of foreign loans, which officials then allocate to private banks – usually those with close clientele relationships with the government.

Moving down the line, nepotism also decides which private companies can acquire credit from banks. More often than not, investments end up in the major coastal cities, leaving almost four million rural Tunisians – 35 percent of the population – working and living in only 15 percent of the total Tunisian economy.

Last May, a “Second Revolution” erupted outside Tataouine, a rural city in the south, protesting corruption in Tunisia. Demonstrations called for increased regional investments and jobs and demanded that one local oil company in particular implement employment quotas for Tunisian nationals.

In tandem with the democratization, a number of anti-corruption agencies like the National Authority for the Fight Against Corruption (INLUCC) have been created. In an ironic twist of fate, the current government used the widespread anti-corruption sentiment to accuse recent protesters of colluding with smugglers and violent extremists.

While much of the called-for investments in inland Tunisia may, no doubt, end up in the hands of corrupt officials and businesspeople – just as it does in coastal cities – capital flows will nevertheless begin to amend regional economic disparities and prevent future conflict. Indeed, the World Bank notes that rather than improving since the 2011 revolution, the economic divide between the inland and costal regions has grown more severe.

To fix these problems, the International Crisis Group recommends encouraging the Tunisian government to give more funding to the INLUCC and facilitate an economic dialogue between regional elites. Until corruption in Tunisia is brought to an end, foreign loans will continue to merely stimulate certain segments of the Tunisian economy and exacerbate regional tensions.