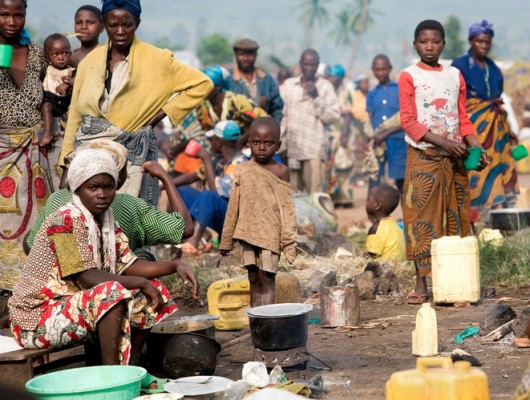 Almost half a million people have fled the Central African Republic (CAR) as a result of ongoing violence occurring in the region. Among those refugees fleeing violence in the CAR, 110,000 have sought shelter in the Democratic Republic of Congo.

“The support shown by Congolese for the neighbors from CAR is exemplary. We should remember that this is one of the poorer regions in sub-Saharan Africa. Many of the hosts already live below the poverty line,” Stefano Severe, the United Nations Refugee Regional Representative for Central Africa said on the organization’s website.

The CAR has been plagued by widespread conflict since 2013, when rebel group Seleka marched on the capital, overthrowing the president, François Bozizé, bringing instability and unrest to the country. The political struggle quickly led to violence among the Muslim and Christian communities in the area, as rival militia groups unleashed rounds of terror upon the region.

Amnesty International reported that international war crimes and crimes against humanity have regularly been committed throughout the nation, “including killings, mutilation of bodies, abductions, recruitment and use of child soldiers and forced displacement of populations.”

According to the United Nations News Centre, intercommunal violence in the CAR erupted in September, after nine months of improved stability in the country, killing 130 people and raising the number of internally displaced persons in the area by 18 percent. This led to a mass exodus of individuals out of the nation. Many of these residents have fled across the Ubangai River, bordering the DRC, with the aim of escaping the conflict occurring in the region.

While the majority of these individuals reside in refugee camps, approximately a third of the refugees in the DRC are staying with local Congolese citizens that are reaching out to help the displaced individuals, according to the U.N. Refugee Agency (UNHCR).

Residents of a town named Zongo have come together to improve the lives of the people flowing into their community. Located on the banks of the Ubangi River, directly across from Bangui – the capital of the CAR, the town is often the first place refugees enter after they flee the city.

“We are Congolese. We always offer shelter to someone who had to flee,” Zongo resident Blandine Ngeki said to the UNHCR.

Schools in the border town have increasingly stepped up their efforts to take in refugee children who are eager to continue their education, despite the lack of monetary funding they receive. In particular, the Mohamad Primary School in Zongo has set up six new temporary classrooms to give educational opportunities to the displaced children in the area.

“UNHCR gave us some plastic sheeting and benches. We have eight teachers,” Abdulaye Livana, the school’s manager, said to the U.N. Refugee Agency. “Only finding money for their salaries is not easy.”

Health centers throughout the area have also given aid to the influx of displaced persons entering the community, despite the lack of money they have.

“Sometimes, the refugees do not have much,” said Jacob Wakanza, manager of a health center that frequently subsidizes costs to help refugees in need. “It can be less than the treatment would normally cost. We try to show solidarity. They are human beings.”

The UNHCR’s ability to help refugees fleeing violence in the CAR has been hindered by a lack of funding. Earlier this year, the U.N. organization called on donor nations to pledge $500 million in aid to help the refugees fleeing the CAR and Nigeria, as well as the neighboring communities that are hosting them.

“UNHCR is doing its best to help local communities in this situation, including those near the border and next to the refugee camps,” Severe said.