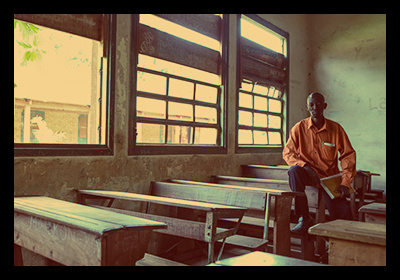 Access to the most basic level of education in the Central African Republic has been limited since the beginning of the rebel uprising.  Despite the efforts of the United Nations Children’s Fund, the country needs at least $7 million to resume regular schooling.  Thousands of children have fled for their lives to neighboring countries where as refugees they may receive some amount of education.  However, in rural refugee camps, older students have no access to education at their higher level.  The mass exodus and ever growing number of internally displaced persons has rendered consistent education nearly impossible.

While religion certainly has played its role in the conflict, preexisting instability created a context in which violence could flourish.  Many of the young soldiers fighting on either side joined solely with the hope of finding work.  The Sahel remains one of the poorest places in the world, filled with endless violence and hunger.

The education system in the CAR was weak long before the most recent interruptions.  Literacy rates stagnated at little over 50 percent for the overall population, and significantly lower for women.  The majority of teachers were unqualified and underpaid.  Still, having joined the Global Partnership for Education, the CAR received a $37.8 million loan to improve national education.  Before the conflict broke out, the CAR saw a 13 percent increase in children attending primary school – a tremendous sign of progress in a few short years.

In the months that have passed since the most recent conflict began, schools in the most war-torn provinces have been looted and destroyed while teachers have fled out of fear.  Students are at risk of losing an entire school year now that over half of all schools across the CAR are closed.  Parents throughout the CAR fear sending their children to the schools that are still open.

UNICEF has responded to the crisis by working with the Ministry of Education in the CAR and NGOs throughout the region.  Together they have seen the following success:

The following months will require the financial support found only in the larger international community.  This support is crucial to the eventual eradication of poverty and prevention of future violence.