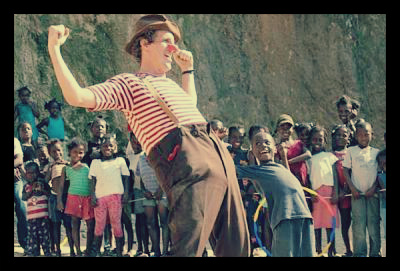 The rainbow wigs and red noses, white-painted faces and huge shoes, flower pins and polka-dotted jumpers. In the developed world, it is hard to reminisce about one’s childhood without mentioning a clown and the smiles and laughter that accompanied its presence at a first birthday party perhaps. But for a child living in a poor country, smiles and laughter are rare commodities.

So that’s where Clowns Without Borders comes in.

The “one of these things is not like the other” song may come to mind, but like the other NGOs previously listed, Clowns Without Borders (CWB) holds their same philosophy of sending professionals from foreign countries to developing countries to use their career skills to help the poor. The only difference is that CWB, of course, sends professional clowns.

CWB was established in July 1993 in Barcelona by Spanish professional clown Tortell Poltrona. Poltrona was asked to perform in a refugee camp in Croatia during the Yugoslav Wars, which surprisingly drew more than 700 children to the event. Seeing that there was a great need for clowns and their entertainment in crisis situations, Poltrona founded the organization, which started in the Balkan countries such as Croatia and Bosnia Herzegovina.

Soon after, more CWB missions were planned for France, Sweden, and other areas of crisis such as the Western Sahara, Palestine, Israel, and Central America. By the year 2000, the organization had undergone more than 100 missions and brought joyful experiences to countless children.

CWB is volunteer-run and volunteers are sent to places of major conflict. For instance, these areas’ children maybe are ostracized due to political troubles, natural disasters, illness, poverty, or combat. The clowns performs their contemporary clown and circus-oriented shows in many different sites such as refugee camps, orphanages, schools, and even streets and alleyways. By going on these numerous trips, CWB also brings awareness to issues faced in conflict zones and while fostering a sense of solidarity.

Now as CWB celebrated its 20th anniversary this past July it has greatly expanded into an international organization as nine countries, including the US, have started their own chapters of the organization with the goal of going out on at least 100 expeditions each year to numerous areas of conflict all over the world, from Afghanistan to Vietnam.

Traveling near and far and to the ends of the Earth, CWB gives children in desperate situations an opportunity to forget their surroundings and just be children. In places where there is more darkness than light, just “clowning around” can make all the difference.

Russian Economic Crisis May Loom Ahead What is the World Bank?
Scroll to top