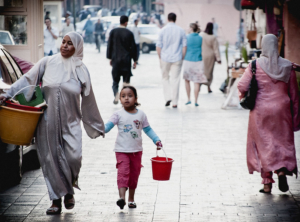 Morocco is a water-scarce country. It is greatly impacted by the effects of rapid desertification, poor water management and high susceptibility to droughts. Water resources in the country have fallen by about 71% since 1980. In rural communities it is common for families to rely on one water source, meaning water scarcity can have profoundly negative impacts on Morrocan families and their livelihoods. Drought, in particular, occurs on average once every three years and can have devastating effects on the livelihoods of Moroccans. About 51.5% of the Moroccan population is negatively impacted by droughts. With drought on the rise, sustainable water management is integral to the development of the economy. As a result, an organization called Dar Si Hmad is stepping in to use CloudFishing to combat poverty and water scarcity in Morocco.

The citizen’s organization ‘Social Watch’ identifies the poor management of scarce water resources as a serious aggravator of rural poverty in Morocco. Farmers and women in Morocco are particularly burdened by the effects of water scarcity. Forty percent of working Moroccans are employed in the agricultural sector and 70% of farmers struggle due to the impact of frequent droughts. Women in rural communities in Morocco spend on average 3.5 hours a day seeking and carrying water, restricting their time in pursuit of other activities.

CloudFishing to Solve the Water Crisis

Dar Si Hmad, a female-led non-governmental organization (NGO), is taking an innovative approach to solving the crisis of water scarcity and alleviating poverty in Morocco. The NGO’s vision is to “enable sustainable livelihoods and create opportunities for low-resource communities to learn and prosper.” It is pursuing this vision, in part, by using ‘CloudFishing’ to combat poverty in Morocco. CloudFishing is an approach to solve the water crisis by utilizing the abundant resource of fog. In Morocco, fog gathers from the ocean and is captured in the mountainous landscape for about 140 days out of the year. Dar Si Hmad uses fine mesh to ‘fish’ for droplets of water within the fog which, once it accumulates, drops into a basin and is then filtered through a process of solar-powered UV, sand and cartridge filters. The water collected by Dar Si Hmad is piped to 140 households providing approximately 500 people in southwest Morocco with access to sustainable clean water. Dar Si Hmad has developed into the largest functioning fog collection project in the world and is directly contributing to poverty alleviation in the country. The project is partly funded by USAID in Rabat, Morocco. Sustained foreign aid from the U.S. is integral to the organization’s continued success. CloudFishing has a positive impact on women in the community who now have more time to devote to pursuing economic activities to help them rise out of poverty. Sustainable access to water also allows poor farmers to have more stable livelihoods and escape the cycle of poverty in Morocco.

While clean water is a human right recognized by a number of international organizations and countries, in water-scarce Morocco it has become a luxury. Dar Si Hmad is continuing its work throughout the COVID-19 pandemic and is preparing to build two new CloudFishers to provide water to 12 additional rural villages in Morocco. Dar Si Hmad plays an integral role in providing solutions like CloudFishing to combat poverty and water scarcity in Morocco. – Leah Bordlee
Photo: Flickr

Book Aid International Contributes to Education in Africa during COVID-19 Healthcare in the Republic of Congo: Steps Forward
Scroll to top