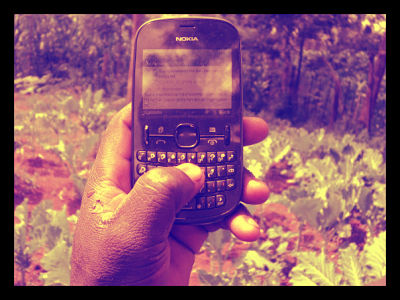 Like many young men living in Kenya, Julius Cheruiyot was forced to drop out of school at the age of 16 to work on his father’s farm. Today, Cheruiyot continues to farm, but because of social media, he can now afford to educate and feed his three children.

Julius Cheruiyot belongs to a growing number of farmers who use Young Volunteers for the Environment’s social media to track and adapt to climate change. With the advice of the YVE’s Facebook page, Cheruiyot knows when the best time is to plant his crops and when he should take certain actions to avoid losses.

Many farmers like Cheruiyot have joined YVE in recent years after being recruited at agricultural exhibitions and over the Internet.

YVE is the Kenyan division of a pan-African organization that was founded in Togo in 2011. The group seeks to address declining agricultural yields, which adds to food insecurity and poverty in Africa.

In recent years, changing weather patterns in Kenya and other areas of eastern Africa have negatively affected the majority of farmers. Over the past decade, erratic rainfall patterns and temperature fluctuations have resulted in low yields and failed harvests for many farmers.

The Kenyan Rift Valley, known as the country’s breadbasket, is a major site for maize and dairy farming, but planting maize in the region has become increasingly difficult due to irregular rainfall and outbreaks of pest-borne diseases. YVE gives farmers advice about the types of plants they should crop in certain weather patterns, recommending crops such as millet, wheat, sorghum and potatoes for the current conditions. The organization reports that rotating crops helps to rebalance pH levels of the soil, making it more fertile for future crop cycles.

According to YVE’s President Emmanuel Serem, the organization “engages youth across the country…to make a positive impact in the life of the community by enabling communities to effectively adapt to the effects of a rapidly changing climate.” YVE promotes sustainable practices that help to increase productivity and raises public awareness about rising temperatures and climate change in the region. The organization also aims to correct misinformation about climate change, which has been attributed to causes such as divine retribution.

Today, YVE has more than 900 followers on Facebook who can access information published on the site and discuss farming techniques. YVE capitalizes on the increased usage of social media by young Kenyans to reach those affected by climate change. While YVE has amassed a large following, Serem admits that farmers who lack access to the Internet or who are unable to read cannot access its services.

Regardless of the difficulties farmers may face in utilizing social media, YVE has great potential to reach the eight out of ten people in the region who are farmers, offering a cheap and effective opportunity to increase food security and reduce poverty.