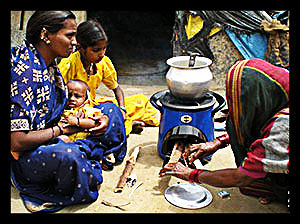 Hunger is not the only food-related problem faced by people in the poorest parts of the world. Even if people have access to nourishing foods, the methods they use to prepare meals can pose significant health risks in the form of in-home pollution.

According to the Global Alliance for Clean Cookstoves, nearly 3 billion people globally cook food and heat their homes using open fires or traditional cookstoves. Smoke exposure from these methods poses a significant global health threat that is responsible for 4 million premature deaths every year, according to Radha Muthiah, executive director of the Alliance. Those figures, Muthiah noted, make “the simple act of cooking a meal the fourth greatest health risk in the world.” Women and children are particularly vulnerable.

The Alliance is a large partnership-based organization that was launched by former Secretary of State Hillary Clinton at the 2010 Clinton Global Initiative. It started with just 19 founding partners. Three years later the organization is significantly larger; currently, it is working with 700 partners around the world.

According to the Alliance’s website, the organization uses a three-pronged strategy: enhance demand, foster an enabling environment and strengthen supply. Enhancing demand involves everything from raising consumer awareness to providing access to financing and developing better technologies. Strengthening supply means making sure there are enough cookstoves available for consumers at prices they can afford. Fostering an enabling environment involves promoting international standards and documenting new research about the benefits of clean cookstoves.

The Alliance has had a number of famous champions in addition to Clinton. They include actor Julia Roberts, Chef Jose Andres, and former United Nations Secretary-General Kofi Annan.

There have been some questions about the long-term health effects of the clean cookstove movement since it started gathering steam. In 2012, a study by a group of Harvard University and MIT professors looked at one specific city, Orissa, India, where the alliance had worked. The study found that there was a meaningful reduction in smoke inhalation during the first year a household used a clean cookstove, but the benefits diminished as time went on because the stoves were often abandoned if they were damaged. The results provided a note on how the movement could be improved.