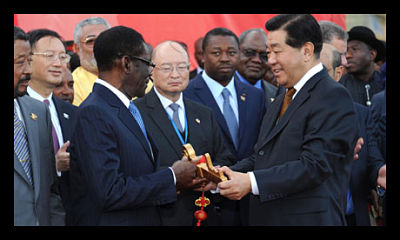 A meeting in Beijing between Chinese President Xi Jinping and Nigerian President Goodluck Jonathan this week resulted in an agreement to provide Nigeria with $1.1 billion in low-interest loans. The loans are intended to help Nigeria fund the construction of various necessary elements of infrastructure, such as airports, roads, and power plants.

While these loans are a significant step forward in the relationship of the two countries, ties do already exist. Chinese companies currently possess contracts worth $1.7 billion for road construction throughout Nigeria. And China’s demand for Nigerian crude oil is increasing rapidly, expected to increase tenfold by 2015, to 200,000 barrels a day.

China’s ties to the African continent do not end with Nigeria. Ghana, Sudan, and Ethiopia are all beneficiaries of aid, loans, and developmental assistance. In the last ten years, China has invested $75 billion in various African countries. And while the United States still invested more – $90 billion in the last decade – the scales are tipping. China became Africa’s biggest trade partner in 2009, and with more deals like the recent one with Nigeria, China will soon be the biggest investor.

While these economic partnerships are mutually beneficial, as China’s official policy is based on political equality and non-intervention in local political affairs, some critics claim the field is not level. For example, many Chinese companies import their own staff to work on the more technical aspects of projects, like design and engineering. Manual labor is also imported for the numerous construction projects on the continent. This results in investment that, while providing necessary infrastructure for the countries, neglects to directly impact their economies via job creation or local sourcing. As many as one million Chinese workers are now employed in Africa, working in telecommunications or mining or retail, jobs that could all be filled by local Africans.

But ultimately, the responsibility lies with African governments to ensure a balanced agreement. And despite criticism leveled towards her, the fact remains that China’s aid is instrumental in the development of many of these regions.