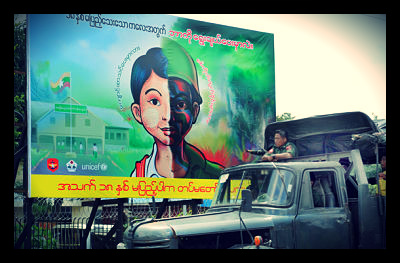 In accordance with the Myanmar army’s Joint Active Plan with the United Nations to release all those soldiers who were recruited as children, 96 former child soldiers were released on Saturday. This is the largest release since the plan was signed in June 2012, bringing the total up to 272.

A blemish on this achievement comes in the form of Ye Myat Oo’s arrest and detainment for deserting his unit. He was recruited at age 17 and is therefore under the protection of the International Labor Organization (ILO) and the Burmese government. A letter stating his protection from all charges and mistreatment was sent from the ILO to the Army base where he was awaiting trial, but on January 7, he was sentenced to one year in prison.

The ILO and Burmese government are now involved in his case. Since Ye Myat Oo should have been released from duty after the plan was signed, the ILO sees his desertion as irrelevant. The Army officers and police who arrested him for leaving the Irrawaddy Division disagree.

As is demonstrated in this case, the plan is hindered by the discrepancy between Government and the Armed Forces in charge of recruitment and regulation. There are still no programs in place to verify the presence of child soldiers in the Border Guard Forces, and though members of the UN are attempting to locate and release underage soldiers they are not being granted admittance to many highly-suspect locations. The factors which prompted Ye Myat Oo to enlist when he was underaged–loss of his family and fear of starvation–are still causes that prompt may children to pick up a gun.

On the topic of the action plan last May, Human Rights Watch representative Jo Becker said, “the Burmese military has failed to meet even the basic indicators of progress.” The past few months have shown an increased effort to make good the promises of the signed plan, but with no record for the number of child soldiers currently serving, the military is reliant on those in the field to make reports, and on its recruiters to stop taking children.