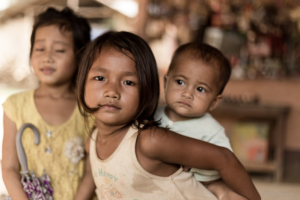 Located in the center of South-East Asia, Laos or Lao People’s Democratic Republic, is one of the poorest countries in Southeast Asia.  Nearly 23% of the total population of 7.2 million people in Laos are below the poverty line.  More than half of the population in Laos are under the age of 18 and they are severely impacted by poverty.  Besides the economic growth, the multidimensional deprivation in children is highly associated with the low levels of infrastructure and the heavy reliance on agricultural activities.  The children in poverty in Laos are impacted in various sectors such as nutrition, child labor and education. It’s important to be addressing child poverty in Laos and the numerous struggles that spawn from it.

Overview of Child Poverty in Laos

In Save the Children’s 2021 Global Childhood Report, Laos was ranked 143 of 186 countries on an index reflecting countries’ average levels of performance based on eight indicators related to child health, education, labor, marriage, childbirth and violence. According to the statistics from UNICEF in 2018, only 12% of children experience no deprivation while the other remaining children under 18 years are suffering from at least two deprivations in the areas of nutrition, health and education.

Widespread child malnutrition and food insecurity remain as persistent problems in Laos.  The World Food Program and Lao government ranked Laos 87th out of 177 countries on the 2019 Global Hunger Index.

In terms of food security, the share of the household experiencing severe food insecurity rose to 23% in May 2022.

In 2021, Prime Minister Phankham cited that a low level of development in Laos correlates with the parents’ reliance on their children to help out with finances at home rather than getting an education. The main problem of early involvement in child labor leads to the lack of educational opportunities.  To elaborate, the 2019 Southeast Asia assessment of learning outcomes showed that fifth-grade students are not mastering the minimum proficiency level for the grade in terms of reading, writing and math skills.

Because of the devastating poverty situation, most of the parents in Laos do not see the importance of education and instead encourage their children to participate in physical labor to amend their financial struggle.  According to an official from the Education Department in Sekong province, students aged 10 to 12 from rural areas often quit school or only attend classes two or three days a week. The lack of infrastructure in the education sector and low government spending has aggravated the situation of the children in poverty in Laos for accessing education.

Since 2021, the impact of the pandemic adversely impacted the children’s education opportunities in Laos.  Approximately 42% of children stopped attending schools temporarily or permanently after many households faced financial collapse because of the pandemic.

To help improve the education status, the World Bank and the government launched a $47 million national project aimed at improving pre-school and primary education performance in September 2021

To enhance the nutrition security in Laos, the government of Laos jointly partnered with WFP’s Country Director to launch WFP’s new Country Strategic Plan 2022-2026 in February 2022.  This strategic plan is centered on expanding and strengthening the Government’s school meals program, working to enhance community resilience and ensure food security.

By implementing long-term commitments and strategies both nationally and internationally, the prospect of eliminating child poverty in Laos is positive.