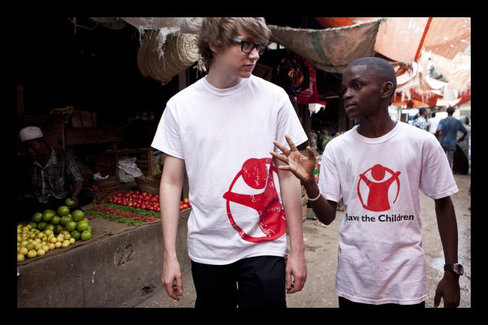 Charlie McDonnell has embraced the publicity of being a “YouTube sensation” despite the negative connotation that can come with that title. The British musician debuted his YouTube talent in 2009 with a video, Duet With Myself.  The clip has been viewed close to 8.5 million times and his YouTube  site has gained over 2 million subscribers.  By his own admission, McDonnell does not claim his videos are brilliant, but he is making money and using his online presence to make an impact.

McDonnell was chosen by nonprofit group Save the Children to promote the fight against hunger with an official title as “YouTube Ambassador.” With that he does what he does best, making YouTube videos that reach a large audience. His current task is playing a key role in the Enough Food for Everyone IF campaign which is backed by Save the Children among other charities. The IF campaign calls on leaders of the world’s rich countries to continue to fight global hunger.

In 2005, wealthy nations pledged to spend 0.7% of their incomes on aid, but few have followed through with their promise. Britain has made it to 0.55% while the US is only at 0.2%.  The IF campaign is calling on these countries to increase foreign aid and reduce corporate land takeovers in developing nations. A rally in Hyde Park is scheduled ahead of the G8 meeting later in June and McDonnell will take part in a live web chat with Bill Gates, who will be there talking about the work the Bill and Melinda Gates Foundation is doing.

Earlier in 2013, McDonnell and his mother traveled to Tanzania with Save the Children to see firsthand the impact of global poverty.  McDonnell said that it was his first time to really see the impact of hunger. While in Tanzania, McDonnell met 16-year-old Frank Kapeta, a Save the Children Youth Ambassador who as a young boy ate as little as one meal a day.  The two traveled to Frank’s village where his grandmother showed McDonnell how to make ugali, a staple food in the village. It is ground flour and water and has little to no nutritional value.

McDonnell and his mother have been leading the #IFYouTube campaign focused at calling the online community to action concerning hunger. For McDonnell, this issue is very important and must be tackled. His experience in Tanzania humbled him and led him to use his online presence to fight hunger and encourage others to do likewise. His is an example of a “YouTube Sensation” gone right.