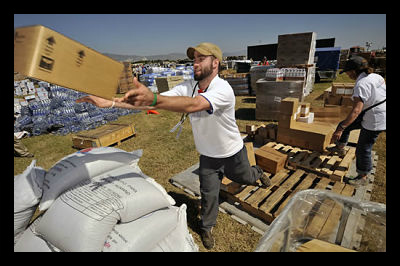 Currently very active in the global health community, AmeriCares is a nonprofit organization that provides medical and humanitarian aid in response to crises all over the world. The organization was started in 1982 by Bob Macauley after witnessing the impact of delivering medical supplies to Poland while it was under martial law in 1981, and has worked to make a difference ever since. AmeriCares strives to help anyone they can without discrimination, hoping to provide people with the resources and help they lack.

AmeriCares works in over 90 countries, with a long history of involvement in emergency response and resource distribution. In the past, the organization has lent a hand in the conflict between Darfur and Sudan in 2004, the 2008 earthquake in China and the 2010 Chile earthquake. The response consisted mainly of delivering medical supplies pertinent to the crisis at hand.

AmeriCares is currently involved in a slew of emergency relief efforts, working to save lives around the world. Recently the organization has been working in South Sudan in response to the Cholera that has infected over 1,800 people.

After sending an emergency shipment of medical supplies to Sudanese refugees in Uganda, AmeriCares has been working to distribute the supplies and get people the help they need. They will be sending a second shipment with enough supplies to support 20,000 people to another organization leading relief efforts in South Sudan. The organization has also provided medical assistance for cholera outbreaks in the past in areas like Haiti, Kenya, Somalia and Sierra Leone.

AmeriCares has also had its hand in supporting those in danger by sending $800,000 worth of medical aid to people in North Korea. The country has been subjected to food shortages and natural disasters, as well as isolation that keeps them from acquiring the resources they need in order to survive.

The organization works domestically as well, assisting with relief efforts after Hurricane Katrina, Hurricane Sandy and the Gulf Oil Spill in 2010. With a large base of donors and partner organizations with similar goals, AmeriCares is able to reach out to people at home and abroad.