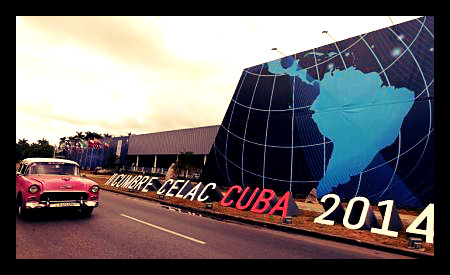 Leaders from across Latin America and the Caribbean met earlier this week in Havana, Cuba, to discuss human rights, peace and trade at the second Community of Latin American and Caribbean States (CELAC) summit. Thirty countries joined the talks, excluding the United States and Canada, which do not belong to CELAC, as well as leaders from Panama, Belize and El Salvador, which could not attend due to illnesses.

CELAC was created in 2011 as a counterweight to the U.S. influence in the region, with forums such as the U.S.-backed Organization of American States (OAS) and the Summit of the Americas, both of which do not include Cuba as a member.

Visiting heads of state declared a commitment to reduce poverty, inequality and hunger while proclaiming the region a “zone of peace.” Leaders such as Michelle Bachelet, the president-elect of Chile, the President of Brazil, Dilma Rousseff and the Cuban president Raúl Castro addressed the issue of poverty and education.

Raúl Castro called for the abolition of illiteracy while stating that the challenge in overcoming this centers around the lack of political will. The Cuban president then criticized the U.S. for its spying programs, the status of Puerto Rico and the current legal dispute between Ecuador and Chevron, the U.S oil company, for compensation over an oil spill that caused environmental damage.

Cuba has been criticized for cracking down on protests against the summit and is thought to have detained up to 40 activists prior to the event. The spokesperson for the U.S. State Department claimed that the CELAC countries “betrayed” democratic principles by supporting the Cuban regime during the summit.

In response to the U.S. criticism of the summit, Venezuelan President Nicolás Maduro stated that the U.S. should “swallow” their claim, which, moreover, reveals the “imperial interests” of the United States. The Venezuelan president further solidified his ties with Cuba by signing 56 new bilateral agreements worth $1,259 billion in the oil, energy and petrochemical sectors.