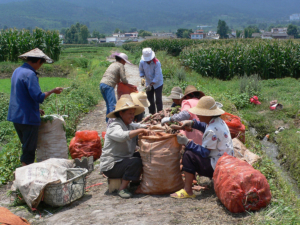 When it comes to fighting poverty, it can often be challenging to find a simple concrete solution. However, a remote Chinese village, Yuanxin utilized an incredible new tool to eradicate poverty: corn. Yuanxin is a self-governing remote Chinese village in northern China. People have known it as a “national-level poverty-stricken village” for many years.

To help mitigate the poverty crisis, Zhang Hua went on behalf of the Beijing Forestry University to aid Inner Mongolia. At the beginning of his mission, Hua’s biggest challenge was the villagers’ distrust. To win them over, Hua began to implement solutions to the problems he saw in the village. These solutions included repaving the roads and increasing crop yield by deterring insects from eating the crops.

As reported by the Global Times, Yuanxin and Hua’s most significant victory against poverty happened when Yuanxin started investing in “black agriculture.” Black agriculture refers to the process of farming a type of black sticky corn known as waxy corn. The corn became immensely popular in Beijing. People even dubbed it “Yuanxin” after the village it came from.

By developing an agricultural hub for the corn in a remote Chinese village, the value of corn went up three times more than before. By the end of 2018, the town became poverty-free.

The development of farming corn in Yuanxin also had considerable ripples in the local economy. Previous to the tactics that Hua implemented, people in Yuanxin often lacked the financial means to afford local goods. They would pay on credit. This resulted in a lack of cash influx, further worsening the local economy. By uplifting the agricultural sector of Yuanxin, the entire village received an economic boost.

The economic advantages of investing in agriculture in developing nations are not just specific to Yuanxin, but rather an emerging global trend.

Growth in agriculture in developing nations can be five times more effective at mitigating poverty.

This is because there is a strong correlation between poverty and agriculture-related jobs. In China, specifically, 35% of the population works in agriculture. Farms in developing countries are often small and family-based. They also have strong ties to the local community.

The remote Chinese village of Yuanxin is highly representative of the broad investments China has sown in agriculture. It is also highly suggestive of the considerable benefits it has reaped. China has seen an average economic growth of 9%. China maintained such high growth levels because it was also continually expanding its agriculture division by 4% to 5%.

Xinhua News Agency is the official state-run news agency. It reported that China achieved its high growth model by forging constant new improvements in agriculture technology. It also did this by expanding “high-standard farmland” to around 42.7 million hectares.

Overall, the remote Chinese village of Yuanxin represents a strong example of how other developing nations can grow its economy. It can do this to mitigate poverty by strengthening agricultural practices. By investing in their agricultural sector, China managed to plant the seeds of the future that many future generations will reap the benefits of. The same is possible for other developing nations around the world.