In the past two decades, Vietnam has made incredible progress. Not long ago, it was considered a developing country; however, since the introduction of the Doi Moi reforms of 1986, Vietnamese per capita income has increased from $100 to $1,130 (USD) in 2010. The population rate of poverty decreased from 58 percent in 1993 to a much smaller 14.5 percent as of 2008, a figure that continues to diminish yearly. Vietnam‘s economy has progressed impressively. With the embrace of free market reforms and an influx of foreign development and investment, its private sector has enjoyed immense job growth. The nation swiftly achieved half of its 10 United Nations Millennium Development Goals (MDGs) and will likely reach an additional two MDGs within the next year. It is clear to the international arena that Vietnam is well on its way to both modernization and economic prowess. According to UNICEF, Vietnam’s MDG of focus was one aiming to eliminate food poverty. Efforts to achieve this goal meant food poverty rate decreased by over 66 percent — going from 25 percent in 1993 to just 6.9 percent as of 2008. To put this statistic in a perspective, about 15 percent of the U.S. population exhibited food poverty in 2012. Despite these encouraging improvements, malnutrition in Vietnam remains a serious concern. The country’s large child population — numbering approximately 26 million — still suffers disproportionately from malnutrition. Currently, one-third of all children in Vietnam under 5 years of age experience stunted growth resulting from chronic malnutrition. Additionally, 20 percent of this young population is regarded as malnourished and under healthy weight baselines. As the country continues swiftly on its progressive trajectory, steps must be taken to combat these statistics and lower the high incidence of child malnutrition. As the nation’s economy is heavily based in agriculture, it exports huge amounts of produce. Some argue that portions of this surplus could be easily directed toward child malnutrition, resulting in a significantly healthier and happier population. As the Doi Moi continue into the next few years, hopefully this MDG will be reached. – Arielle Swett Sources: Feeding America, World Bank, UNICEF 1, UNICEF 2 Photo: UNICEF Prominent human rights lawyer Le Quoc Quan was recently convicted for tax evasion in Vietnam in another example of Vietnam’s arbitrary detention practices aimed at those criticizing the Communist Party.

This is not the first time Le Quoc Quan has run afoul with the Vietnamese authorities.

In 2007, Quon returned to his home country after spending several months researching civil society and economic development in Washington, D.C., at which time he was promptly arrested on trumped up charges of subversion. After much public anger over his arrest he was released, but the authorities kept close watch of his activities.

His most recent run-in with the law came in December 2013, when he criticized Article 4 in the Vietnam constitution, which enshrines the superiority of the Communist Party.

The court convicted him of tax evasion, a common charge for those who are considered political dissidents by the Communist party. He is currently imprisoned in Hanoi.

Despite the seeming hopelessness of his situation, Le Quoc Quan has not lost his vigorous penchant for dissent. As of February, he is currently on a hunger strike within prison.

His situation has garnered international attention, specifically from the United Nations, who has called for his immediate release or for an independent court to conduct his trial.

Unfortunately, Quan’s predicament seems to be too common of an occurrence in a country that rests in the firm grip of the Communist Party; the only legal party in Vietnam.

The list of episodes exhibiting Vietnam’s unwillingness to support basic human rights enjoyed in more developed nations is quite lengthy. For instance, no independent media is permitted; freedom of assembly, expression and religion are extremely restricted.

Also, workers who toil away in factories are not allowed to speak out against the harsh working conditions they endure. In 2010, several factory workers were convicted and imprisoned with sentences ranging from seven years to nine years simply for organizing their fellow workers in the shoe factory that employed them.

Le Quoc Quan’s future seems uncertain, but not without a glimmer of hope. The appellate division of the Hanoi Supreme People’s Court will hear his case on February 18.

The international attention Quan has gained could tip the court’s ruling in his favor. But despite the possibility of a small victory, Vietnam has significant steps to take before their human rights situation improves.

In a brazen display of hypocrisy, the Vietnamese government announced several lofty goals at its Universal Periodic Review conducted by the UN Human Rights Council. The country’s representative stated that protecting human rights through judicial reform is a chief government concern.

Several of the measures stated such, as the right to a fair trial, providing independent judges to serve on courts and allowing lawyers to freely defend their clients would be a welcome change. But many nations remain skeptical of the government’s alleged enthusiasm for initiating these much needed reforms.

A mother’s typical question to a child, “did you wash your hands?” may have seemed like a pesky reminder when growing up, but research shows that hand-washing is one of the most important and live-saving habits that can be instilled in a society. Hand-washing with soap has been shown to reduce the incidence of diarrhea by almost one half and of acute respiratory infections by roughly one third.

Since hand-washing is one of the most cost-effective ways to reduce deaths of children under five from diseases like diarrhea and pneumonia – possibly by up to 70% -, the global health soap brand Lifebuoy is teaming up with USAID to create a neonatal program designed to raise awareness of the link between newborn survival and hand washing with soap.

The program targets new mothers and birth attendants through antenatal clinics and health workers. The campaign also uses innovative videos to appeal to the mother’s maternal instinct by communicating the message “hand-washing helps your child survive.” Persuasive advocates such as the Indian actress Kajol also support the cause and help generate awareness of the importance of hand-washing, especially after having used the toilet or before preparing food.

Another initiative which aims to modify everyday behavior is the Global Scaling Up Hand-washing Project, supported by the World Bank in countries such as Peru, Senegal, Tanzania, and Vietnam. These interventions found that while will and motivation to change habits might be present, hand-washing is also dependent on the ease of access to both water and soap. In this way, the program has aimed to make changes in the way soap and water are accessed in households.

The initiative has also found that in countries such as Senegal, men can also play a critical part in the behavior-changing process. Since they are seen as the role-models or leaders of their households, future interventions will also incorporate campaigns that include or are aimed at men. 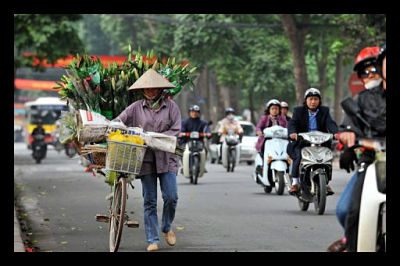