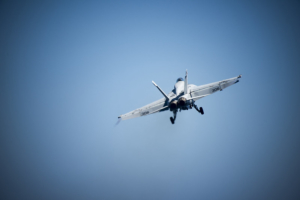 “Top Gun: Maverick” was released on May 27, 2022, hitting upward of $1 billion globally. The film is a sequel to the original 1986 classic starring Tom Cruise and depicts fighter pilots in the U.S. Navy training for a risky mission. As a high-energy action film, the scenes of actors being jostled in fighter jets are an integral part of the movie’s excitement and fun. However, the spending allocated within Top Gun’s budget reveals funding possibilities for international aid programs.

The Filming of “Top Gun: Maverick”

Given Cruise’s commitment to realism, it may be unsurprising that scenes including flights in F/A-18 Super Hornet fighter jets are real. Actors flew in jets rented directly from the U.S. Navy, getting the chance to experience the thrill of high speed and the grueling reality of high gravitational force.

However, this immersive approach to moviemaking came at a staggering cost. Bloomberg reports that the film’s production paid upward of $11,000 per hour to access the fighter jets. Yet, these fees are only a little higher than basic operation costs. The Department of Defense reports that operating a F/A-18 Super Hornet costs $10,507 per hour, not including the initial purchase cost of the aircraft.

These figures hint at the department’s astronomical spending each year. The defense department’s budget request for this upcoming fiscal year is $773 billion— $30.7 billion more than in 2022.

DOD’s purpose is to deter war and ensure the nation’s security. However, countless military officials maintain that preventing war by funding international aid programs such as the United States Agency for International Development (USAID) can be more cost-effective in the long run.

International aid programs that reduce hunger and disease and spread stability through education can prevent conflict globally. As the “Top Gun: Maverick” budget highlights, the cost of everyday military operations can be exorbitant. The U.S. could funnel some of that money into international aid instead.

What One Hour of Flight Time Could Do for Global Poverty

To illustrate this point, one can look at what the U.S. military could do with the funding that matches one hour of flight time in a fighter jet— $10,507.

Seeing how Top Gun’s budget reveals funding possibilities gives pause to how much change is feasible. With even a portion of the $773 billion in yearly defense spending, just one hour of flight in a fighter jet could do much for global poverty.

The organization Global Campaign on Military Spending works to advocate for the reallocation of military spending to peace and public aid programs. Established in 2014, it holds an annual event to raise awareness about military spending and to change the conversation.