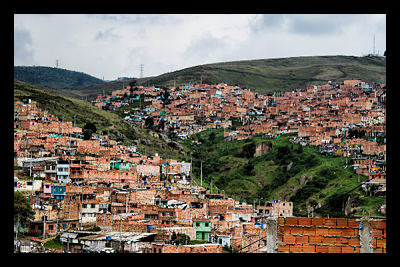 Poverty in Colombia remains an issue but progress has been made. In the 1980s, the capital city of Colombia, Bogota, started to implement a program of economic stratification of urban populations. The city ranked populations from one to six, one being the most poor and six being the wealthiest. Essentially, the stratification was supposed to direct city officials where to charge more for basic services like water and sanitation, and where to charge less. This program was officially codified into law in 1994.

Proponents of the program, like former Bogota mayor Enrique Peñalusa, say that the stratification only helps the government to serve the poor better by focusing infrastructure projects and providing cheaper services. Opponents, however, say that it makes mobility for the poor more difficult by legally separating them out, as well as increasing stigma around poverty.

When mapped out by strata, it is clear to see the physical separation of economic classes in the capital city. The wealthiest populations are clumped together in the northern part of the city while the poorest are in the south and along the outer edges. The distribution of wealth in the city is compartmentalized, depreciating an already underserved population.

Armed conflict in Colombia has been persistent for this century and half of the last. Due to this, Colombia has one of the highest rates of internally displaced persons (IDPs) in the world, reaching over five million in 2013. Many of these IDPs move to cities, especially Bogota. This shift has led to a large population without housing or resources, creating slums and shantytowns in and around the city.

Especially significant when looking at urbanization in Bogota is the development of a much poorer, extremely marginalized class on the outer edges of the city, where slums have grown significantly. Two of the largest slums, Altos de Cazuca and Ciudad Bolivar, house hundreds of thousands of people and are host to a myriad of social problems, most notably violent crime and poor access to essential resources like clean water, health care and education.

Conflict in the country has caused and contributed to countless problems, not in the least a robust drug trafficking industry. While peace talks with armed guerilla groups and narcotraficantes are ongoing, the outcome and impact for the urban and displaced poor that have been affected but not directly involved in the operations of these groups is not clear.

Levels of poverty have declined overall in Colombia in the last decade. Even more promising is the dramatic decrease in urban poverty in the two biggest cities in the country: Bogota and Medellin. While the legal stratification of urban citizens and rapid rates of urbanization have contributed to poverty in Bogota, the progress made against urban poverty is substantial. From the years 2005 to 2012, poverty has only fallen 7.6 percent in small cities in Colombia, but in Bogota and Medellin the rate has fallen 23.3 percent.