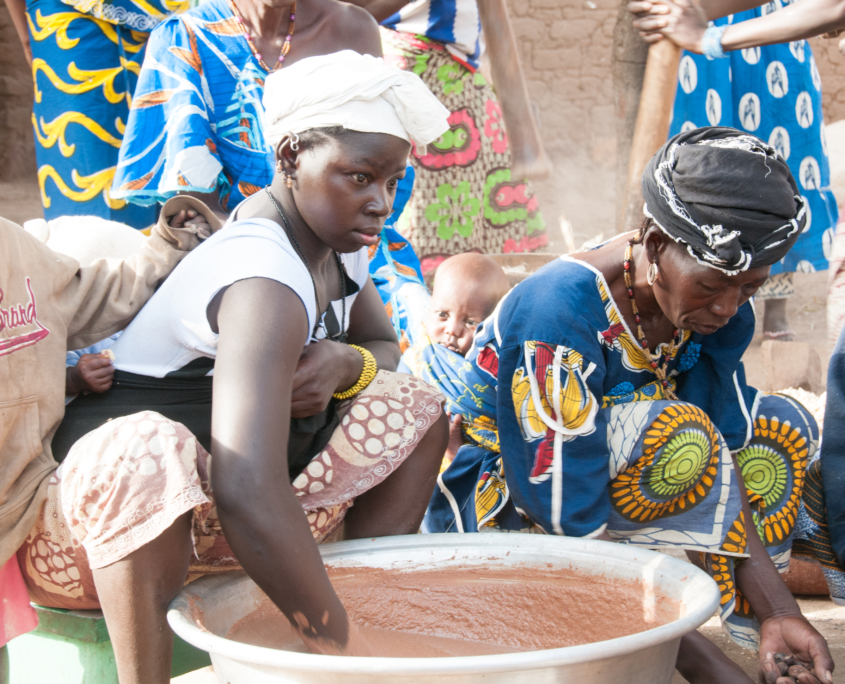 As the sun rises over the wild-growing shea trees in Mali, West Africa, women from surrounding villages frequently work at the base of the towering trees gathering up the precious shea fruit. Encased within the fruit’s delicious pulp is the invaluable shea nut. Once their containers are full, the Malian women walk several kilometers back to their villages with up to 50 kilos of fruit in teetering baskets upon their heads. There, the fruit heads storage until it is ready for processing. Mali’s shea butter production has the potential to uplift the country’s economy significantly.

Mali is the second-largest producer of shea nuts. It supplies more than 20% of the world’s shea nuts, which primarily go toward making shea butter. Shea butter’s primary use is in food and cosmetic products. The shea butter industry has grown over 600% in the last 20 years and is still on the rise. West Africa exports more than 350,000 tons of shea butter annually. In short, demand is not an issue but due to inadequate processing technology, Mali’s full wealth potential of shea butter production has not undergone realization. With over 42% of the country’s population living in poverty, the untapped possibilities of a modernized, efficient shea butter production practice desperately needed unearthing. The International Finance Corporation (IFC) decided to do just that.

The IFC Lends a Hand

The IFC is loaning approximately $3 million to Mali Shi, a shea nut processing plant located just outside Mali’s capital city of Bamako. The goal is to build a new, more modern plant with updated technology to boost efficiency and promote a better product. The IFC has also committed itself to offering training in business and finance as well as management skills to the shea nut suppliers in Mali. The shea supply chain in Mali mostly consists of women. Therefore, the bolstering of the shea butter industry in this region will allow these women to pay for their children’s schooling, invest in a family business and access transportation.

The shea butter industry is not slowing down any time soon and women in low-income countries are on the frontlines. As the shea fad continues, more and more companies that use shea butter in their products are working to keep their focus on the hard-working women supplying the shea nuts. As companies bring in profits, many are fighting to ensure the suppliers of the valuable shea nuts are reaping the benefits of the backbreaking work.

Ghanaian American Rahama Wright is one of them. Rahama’s company, Shea Yeleen, has a business model that benefits the suppliers in the West African countries producing the shea butter. Shea Yeleen offers shea producers five times the typical income. Instead of an average of $2 per day for the labor-intensive work, many suppliers are now receiving $10 per day from Rahama’s company. Additionally, many of the women who belong to the cooperatives Shea Yeleen supports receive health insurance, training and access to savings groups. Shea Yeleen ensures its suppliers receive compensation by processing payments through the cooperatives and requiring signed payment receipts from cooperative members.

In a nutshell, as demand for Mali’s shea butter continues to rise, investment in shea entrepreneurs is vital. The efforts to modernize shea processing in Mali offer a bridge between a life of poverty and one of financial stability. For more than 120,000 individual shea nut suppliers to Mali Shi (95% of which are women) the ability to process shea butter with a higher level of efficiency means a brighter future. This empowerment not only benefits the farmers directly affected but also provides an opportunity for serious economic growth for the country.