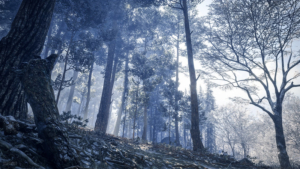 In the summer of 2021, Russia experienced the driest weather in 150 years which caused wildfires in Siberia. Smoke covers the Yakutia region in particular and is destroying the Taiga forest around Teryut. Locals to this area, in part blaming an inadequate response to the fires by the Russian government, are beginning to help fight the fires.

What is at Stake

In 2020, the wildfires in Siberia destroyed 60,000 square miles of forest and tundra. This is equivalent to four times the area that burned in the United States in the same year.

For Russia, this means that the fires destroy drastic amounts of the boreal forest. It also releases tons of carbon into the atmosphere. This can contribute to higher temperatures overall. The forests in Siberia also have permafrost beneath them. This is part of the earth that stays frozen all year long. When fires blaze through the area, the permafrost melts, altering the dynamic of the forest itself. Instead of being the forest it has always been, the area has become much more swamp-like.

In the Yakutia region in particular, where the fires are decimating the Taiga forest, villagers’ livelihoods are at stake. People typically rely on the forest for food, including berries and meat. Additionally, they use wood to build structures and for warmth. The destruction of this resource can have a detrimental impact on the people who live there, especially the people who cannot afford to relocate.

The destruction that wildfires create has a disproportionate impact on people living in poverty. People living below the poverty line often do not have insurance protecting their houses from such a catastrophe. They also may not have the resources needed to either rebuild a destroyed house or to move to another area.

A study that the National Bureau of Economic Research completed released results in 2020 that analyzed 90 years of data recorded during natural disasters. It concluded that when natural disasters occur, the poverty rate in that country increases by about 1%. This is a result of the migration of higher-income people. However, those unable to move often end up in even worse conditions than before.

How Locals Have Stepped in for the Government

One reason why the local villagers are volunteering to join fire fighting crews is the lack of response from the Russian government. The locals have put the main blame for the wildfires on the government’s unpreparedness for such a disaster. The government made budget cuts to forestry and banned getting rid of dry grass in high-risk areas and the hot summers.

The Russian government turned to conspiracy theories this time. It hypothesized that people hoping to make a profit set the fires on purpose. There are ongoing criminal investigations against authorities for not doing enough to fight the fires.

Locals have been doing the best they can given their lack of training and preparedness. Thankfully, the Russian government has recognized the severity of the situation in Siberia and has sent military planes in to assist the fight. These planes have dropped an estimated 370 tons of water onto the fires covering 2 million acres of land.

With the locals and the government working together, hopes are high that the joint effort can combat the fires effectively. While the government may not have done as much as it could have in the beginning, it did take action to help the situation. Hopefully, it will be able to effectively help to fight and prevent wildfires in Siberia in the future. In order to help and protect those living under the poverty line, this will likely be necessary.