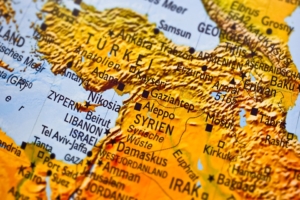 Proxy wars are one of the major categories of conflict that contribute to humanitarian crises around the world. The war can take place between multiple countries, or a country and a nonstate actor like a politically violent group. Proxy wars are often ideological and hold ties to a country’s religious systems. Multiple proxy wars can occur simultaneously around the world. In addition, multiple states can back proxies within other states, which can be seen in both Syria and Yemen.

What is the Appeal of Proxy Wars?

Using proxies has tactical advantages. According to a 2018 article by Philip Bump in the Washington Post, there were “around 5,000 American service member deaths” in the Iraq war. This leads to why countries use the proxy strategy and avoid direct warfare with an adversary. A country sponsors the military operation of a different country to do the fighting. Countries like the U.S. can avoid sending U.S. troops into war, and consequently, avoid loss of life and increased civilian risks.

What are the Down Sides to a Country Involved in a Proxy War?

One of the primary examples of why proxy wars are not beneficial is the risk of prolonged conflict. Being involved in a proxy war can include aiding a country by giving them weapons, money, or planning and assessment help. In the short term, proxy wars are seen as a way to avoid direct conflict for a country. However, proxy wars can actually increase spending and political costs as well.

Another example of why proxy wars can create more problems is the issue of accountability. After the transfer of weapons, funding or assessment help, the country or nonstate actor has those resources. Additionally, it makes the final call as to how those resources are used and allocated. This creates a problem with corruption where the original intent a country has in giving aid may not be fulfilled by the receiver of this aid. The weapons could be used to attack civilians or given to other parties in the war that they were not intended for.

What are the Human Costs in Proxy Wars?

Two of the current and most devastating proxy wars are happening in the Middle East, specifically in Yemen and Syria. The two countries are prime examples of how state sponsored militant groups and coalitions interact in warfare. It also shows how the larger regional powers fight their ideological battles for power and domination. Saudi Arabia in the Gulf and Iran in the North do this by intervening in civil wars in smaller countries that are vulnerable to collapse. Both wars also exemplify major issues like extreme poverty and famine, internal displacement and mass humanitarian need. All of these factors impact civilians and their security.

What is the Status of Yemeni Civilians and the Proxy War?

In Yemen, a number of different actors joined together to form two adversarial groups who fight primarily in the West. The Northern region of Yemen is controlled primarily by the ‘Houthis,’ a militant group backed by Iran who observe the Shiite faction of Islam. The Southern portion of Yemen is primarily controlled by the coalition forces which include Saudi Arabia and its ally, the UAE. The U.S. also supports this faction as well, this is the Sunni faction of Islam’s side.

The war in Yemen has grown into one of the largest humanitarian crises globally. Around 24 million people are in immediate need of humanitarian assistance, as well as four million displaced people. Due to the location of the fighting, many people have fled out of the Western region. They fled away from ports where much of the contested land is and where the primary armed conflict takes place. The civilian casualties have been severe, with around 100,000 killed in the last five years of war.

What is the Status of Syrian Civilians and the Civil War?

The proxy war in Syria is the other major proxy conflict in the Middle East. The peak of international interest and coverage occurred in 2013 when chemical weapons were first reported to have been used against Syria. This led to a very contentious situation regarding whether or not international human rights would be upheld. The conflict and its effects are still very much present in the country. There are estimated to be 6.2 million internally displaced people in Syria, as well as 5.6 million registered refugees who have fled the country. The Syria Observatory for Human rights reports that the civilian casualties and other human rights violations have recorded “560,000 deaths over 7 years” from 2011-2018.

Ultimately, the end of many of these wars is still out of sight. Understanding these conflicts and how their detrimental effects impact civilians will hopefully change the narrative around proxy wars at the national level. These conflicts are responsible for some of the largest humanitarian crises on the planet. Hopefully, with continued reporting, the devastation proxy wars cause will be better illuminated.